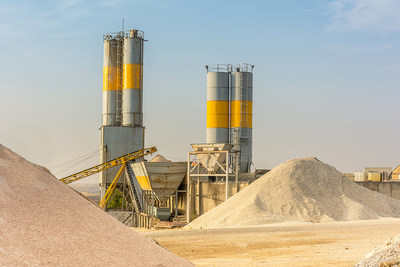 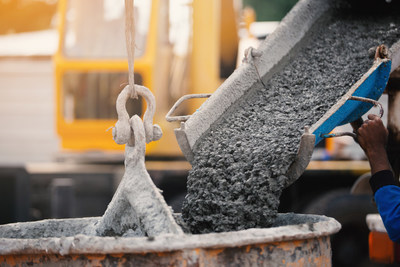 Each year the world uses approximately 4 billion tons of concrete as it is the world's most common building material.  Unfortunately, the cement component in concrete's production process also emits a tremendous amount of CO2 in its production.  According to reports the cement industry is responsible for nearly 8% of global annual emissions and if the cement industry was a country it would be third in emissions behind the US and China.

The cement production process requires a tremendous amount fossil fuels to heat the kiln to around 2,000 degrees, equating to every ton of cement manufactured emitting about one ton of CO2. Concrete is composed primarily of sand and gravel from mines, but cement is the principal contributor to the carbon footprint of concrete, even though it comprises only about 10 – 20% of concrete's mass.

Blue Planet's revolutionary process can create carbon neutral and carbon negative concrete, with the same structural integrity of existing concrete. Additionally, the process enables the world to create a first of its kind closed loop concrete system reducing the need to further destroy the environment and consume new materials.

CEO Brent Constantz has over 100 issued US patents and many more patents pending on this type of process technology and has already brought on investors and advisors that include Leonardo DiCaprio, the former President of Stanford University, the primary author of the Montreal Protocol, and the creators of the LEED certification.

Blue Planet's process takes CO2 from power plants and sequesters that CO2 in a mineralization technique onto aggregate materials: like sand and gravel.  The resulting material is a synthetic limestone that can go directly back into the concrete process eliminating the need to mine more material and most importantly sequestering the CO2 from powerplants forever; resulting in carbon neutral or carbon negative concrete when used in place of mined sand and aggregate.

Equally as important is that Blue Planet's synthetic limestone aggregate has the same structural characteristics and integrity as mined geological limestones and does not change the performance of concrete.

Blue Planet's process now needs to scale globally. Brent Constantz, CEO of Blue Planet states, "Our development partnership with KDC marks the point of lift off for our technology. This partnership will allow us to scale our profitable technology globally with tremendous efficiency. A first run of the market opportunity is that there are over 5,000 identified sites that would be a good fit for Blue Planet and KDC. If KDC and Blue Planet were to initially develop 100 of these 5000 identified prospective sites as anticipated in the US by 2025, it alone could equate to enough emission reductions of nearly 5% - 10% of the entire U.S.'s Paris Treaty Obligations; if all 5000 initial sites were developed globally, a substantial portion of all anthropogenic CO2 emissions could be avoided."

Hal Kamine, CEO and founder of KDC, which has developed, owned and operated approximately $4 billion of infrastructure nationwide, including 600 megawatts of natural gas cogeneration facilities, states, "Blue Planet's technology has the capability to help reverse climate change on a global level while creating a closed loop concrete system and simultaneously sequester CO2 from power plants forever. It is a win on every level, and we believe this will become a substantial global business.  There is no reason that every building, bridge, road now should not be carbon negative as we can sell these materials into the market at present pricing. This fits into all existing systems in an economical and sustainable way!"