The powder-coated fabricated aluminum sculpture measures 16 by 7.5 feet and was created by local artist Mino Duffy Kramer. Her credentials include the prestigious Accademia de Belle Arte in Florence, Italy, and an apprenticeship with sculptor Ferenc Varga at his Florida studios. 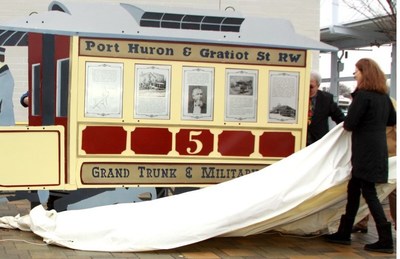 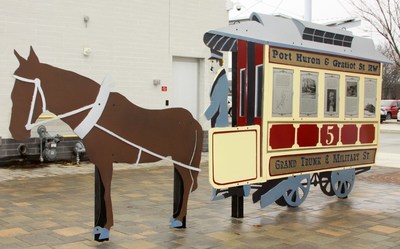 "We started out wanting a statue of William Pitt Edison, but Mino suggested focusing on our many innovative milestones," said Jim Wilson, BWAT general manager. "The finished sculpture includes five panels seen through five streetcar windows. It not only honors William Pitt, but also highlights our local transit history."

William Pitt Edison was born in Vienna, Ontario. He settled with his family in Milan, Ohio, and then Port Huron, where he lived until his death at 59 in 1891. He is the oldest brother of world-renowned inventor Thomas Alva Edison.

Both Edison brothers started out serving passengers on the Grand Trunk Railroad train to Detroit that opened in 1859.

Years before his name became synonymous with mass produced lightbulbs, Young Tom Edison worked as a candy butcher selling fruit and newspapers aboard the train. Meanwhile, his older brother saw an opportunity to transport travelers to the train station with a horse-pulled trolley and then by horse-pulled streetcars guided by rails along several local routes. He left the public transit industry in 1883.

William Pitt's legacy of innovation continued, with the Blue Water Area remaining at the forefront of new transit developments. Port Huron was one of the nation's first communities to use electric streetcars in 1886 and motor coaches in 1927. After an eight-year hiatus ended in 1976, the Blue Water Area Transportation Commission became Port Huron's first publicly funded bus service. Since then, it has carried more than 31 million riders.