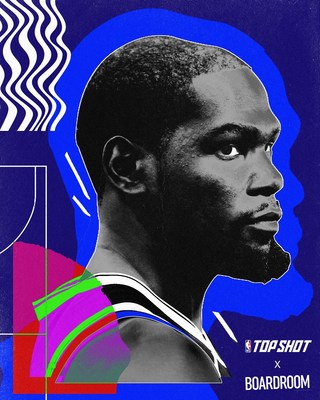 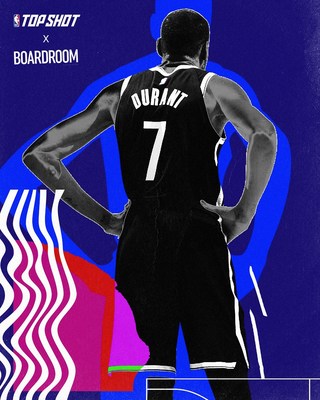 The two-year partnership follows Boardroom's early commitment to covering trading cards, collectibles, and the NFT marketplace, including content collaborations with and editorial coverage for collectors to get the latest on NFTs. With this enhanced relationship, fans will be able to look to Boardroom for not only news and features on NBA Top Shot, but giveaways, spotlights around key Moments and fan to fan trading, and behind-the-scenes video content as well as more traditional sponsorship elements.

"Top Shot is the future for basketball fans - bringing them closer to players and building community across the sport in new and innovative ways. At Boardroom, we've also been at the forefront of the NFT space, and I'm excited to partner in advancing NFTs further into the mainstream, creating and curating exclusive Moments and content with Top Shot," said Durant.

"Thirty Five Ventures has been supporters of and investors in Dapper Labs for some time, and we're thrilled for the opportunity to further partner with them and expand our coverage of NBA Top Shot across all of Boardroom's properties," said Thirty Five Ventures and Boardroom co-founder Rich Kleiman.

"From the moment we met with Kevin and Rich, it was clear that we shared a passion to bring  fans closer than ever and in the most epic ways to their favorite athletes," said Roham Gharegozlou, CEO of Dapper Labs." As KD continues to put his stamp on game-changing moments, we're able to offer fans access to him in entirely new ways and cement NBA Top Shot's place at the center of the fan experience."

About Dapper LabsDapper Labs, the company behind NBA Top Shot and the original developers behind the Flow blockchain, uses blockchain technology to bring NFTs and new forms of digital engagement to fans around the world. Since it was founded in 2018, Dapper Labs has given consumer enthusiasts a real stake in the game by bringing them closer to the brands they love, enabling engaged and exciting communities for them to contribute to, and powering new pathways for them to become creators themselves. Dapper Labs' current studio partners include the NBA, NBPA, WNBA, WNBPA, NFL, NFLPA, LaLiga, Warner Music Group, Ubisoft, Genies and UFC. Notable investors in Dapper Labs include Andreessen Horowitz, Coatue, Union Square Ventures, Venrock, BOND, GIC, Google Ventures (GV), Samsung, and the founders of Dreamworks, Reddit, Coinbase, Zynga, and AngelList, among others. For more about Dapper Labs' products and mission, visit dapperlabs.com.

About BoardroomBoardroom is a media network founded by Kevin Durant and Rich Kleiman that looks inside the business of sports as we've never seen.  The old days of gate-keeping and closed-door meetings are gone: now, athletes, tech moguls and executives alike are moving the sports world - and culture itself - forward. Boardroom is at the forefront of this change, bringing both fans and entrepreneurs unique perspectives on the sports business news, hot topics and key industry players they want to know about.