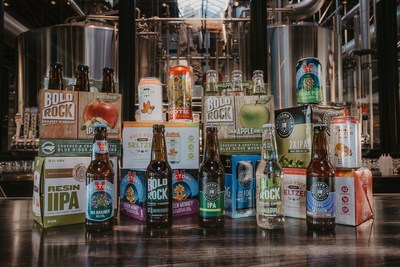 "The founders of Bold Rock should be incredibly proud of what they and their hard-working, dedicated team have created – the #2 cider brand in the country.  With the addition of Bold Rock, ABV is strongly positioned to address the evolving needs of the craft consumer.  Bold Rock's portfolio is a perfect complement to ABV's other partner breweries by bringing consumers a leading hard cider, a new hard seltzer and a line of canned cocktails.  Adding Bold Rock to the ABV family shows a commitment to bring craft consumers great brands across segments to best meet the needs in all of their drinking occasions," said John Coleman, CEO, Artisanal Brewing Ventures.

"Our dream was to bring people together to create special memories and meaningful experiences while enjoying our products.  Since then, we have formed a number of phenomenal relationships with consumers, distributors, and retail partners, as well as with our own employees.  Now, by joining ABV, a very talented, passionate, and high performing  beverage company, we can extend our brand to new consumers up and down the east coast, creating more special memories and unique experiences," said Washburn, who along with Shanks, will remain with the company in leadership roles.

In addition, Bold Rock's four taproom locations will be added to ABV's current footprint of nine open or announced taprooms, giving the company access to over two million customers a year.    Bold Rock will also partner with Sixpoint, Southern Tier and Victory to leverage their collective consumer data and insights to build an impactful innovation program and marketing approach.

Founded in 2012, Bold Rock is the #2 cider brand in the United States.  In its home state of Virginia, Bold Rock is the largest overall independent craft brand across both beer and cider.  In 2019, Bold Rock also launched a line of hard seltzers that feature a unique apple-based alcohol, as well as a line of premium ready-to-drink canned cocktails.

Founder, Brian Shanks, a world renowned 30-year master cider maker from New Zealand, is also excited about the potential of the partnership.  "We are grateful for the incredible opportunity to join such a strong craft beverage organization in ABV.  Many consumers, distributors and accounts have urged us to expand to their areas. Now, we have the resources and capabilities to do just that while also creating more growth opportunities for our team.  We look forward to taking Bold Rock and ABV to new heights together."

Artisanal Brewing Ventures was founded in 2014 as a platform that supports like-minded independent craft breweries in their growth ambitions.  ABV brings expertise, resources and support to its partner breweries but safeguards their culture and respects their local craft soul.  ABV brings top-tier craft adult beverage brands together and unlocks their potential for growth.  Through mergers and partnerships in high-volume, craft-centric markets east of the Mississippi, ABV is building a portfolio of preeminent brands, including Sixpoint, Southern Tier, Victory, and Bold Rock.  The company is a top ten regional craft brewer in the U.S. and has a leadership position in eight of the country's top 50 markets for craft beers. ABV is headquartered in Charlotte, North Carolina, and has operations in Brooklyn, NY, Lakewood, NY, Cleveland, Pittsburgh, and metro Philadelphia.

Bold Rock produces 12 styles of hard cider, including the popular originals Apple and Draft, a rotating mix of seasonal ciders, and IPA (India Pressed Apple), the best-selling hopped cider in the country.  In 2019, Bold Rock launched a 'better-for-you' apple-based hard seltzer line and a line of premium ready-to-drink canned cocktails.