Please note that the English version of the press release issued on August 6th at 7:00AM on CNW was not the correct version.

Highlights for the 2nd quarter of 2021

MONTREAL, Aug. 6, 2021 /PRNewswire/ - During the quarter ending June 30, 2021, Boralex Inc. ("Boralex" or the "Company") (TSX: BLX) continued to add new projects to its project pipeline and to advance its existing projects to the "secured" and "ready-to-build" stages of its Growth Path. The Company also posted an increase in EBITDA(A), primarily linked to the contribution of acquisitions and project commissionings. 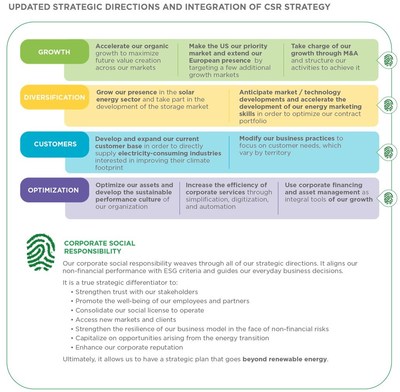 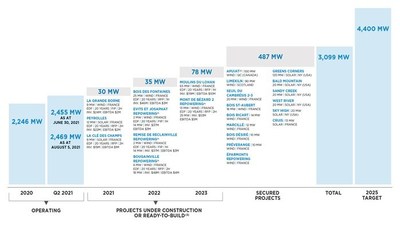 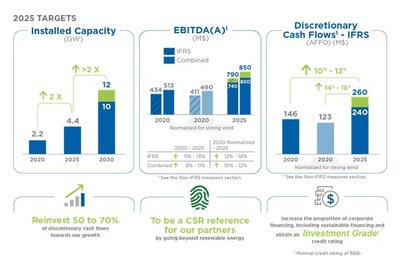 "The second quarter was marked by the addition of 743 MW to our project pipeline, notably in the solar and energy storage markets in the United States, identified in our new 2025 Strategic Plan as key markets. The contribution of our two most recent acquisitions in wind in Quebec and solar in the US as well as commissioning of projects was in line with our expectations and enabled us to continue growing our EBITDA(A) despite the unfavourable hydraulic conditions arising from the low level of precipitation in recent months," said Patrick Decostre, President and Chief Executive Officer of Boralex.

Last June, Boralex updated its strategic plan to take advantage of opportunities arising from the accelerated energy transition and major changes in renewable energy development policies, particularly in Québec, the United States and a number of European countries.

Supported by a strong financial position, Boralex announced its objective of doubling its installed capacity and reaching a combined EBITDA(A) of $800‒850 million ($740‒790 million under IFRS) and discretionary cash flow of $240‒260 million by 2025. This represents compound annual growth rates of 9‒16% for these three performance measures.

With respect to the Company's expectations for the next few quarters, Mr. Decostre added: "We are in the final stages leading up to our project submission for the New York State request for proposals for solar projects. We are very proud of the many high-quality projects and the capacity we are in a position to offer. In the coming quarters, we will also continue to seek acquisition opportunities and to implement the various initiatives outlined in our 2025 Strategic Plan, including the optimization of our capital structure and the execution of our corporate social responsibility strategy."

In the second quarter of 2021, Boralex generated 1,323 GWh (1,485 GWh) of electricity, for an increase of 41% (22%) over the 937 GWh (1,217 GWh) generated in the same quarter in 2020. The increase is attributable to recent acquisitions in the wind sector in Quebec and the solar sector in the United States, as well as the commissioning of wind farms in France.

On June 17, 2021, on the occasion of an Investor Day, management of Boralex presented its updated strategic plan, which will guide efforts to achieve its new corporate targets for 2025. The 2025 Strategic Plan stems from a rigorous analysis of the rapid, significant changes made to renewable energy development policies and greenhouse gas emission reduction targets in certain countries and regions, including Québec, numerous American states and several European countries. It is also part of a process in which a deep and rapid industry transformation is underway, partly due to the high number of technological innovations and the acceleration of the green energy transition. Boralex management also reported strong demand for renewable energy from companies mindful of their environmental impact. Together, these elements make for a business environment that offers numerous opportunities for growth, both organic and through acquisition.

Boralex's 2025 Strategic Plan is structured around the four key strategic directions of the plan launched in 2019 – growth, diversification, customers, and optimization – and six corporate objectives. It also integrates Boralex's corporate social responsibility (CSR) strategy. Focusing on these key areas will allow for accelerated development of the wind and solar portfolios in the high-potential markets already targeted by Boralex and in new markets in Europe and the United States, while also creating the opportunity to introduce energy storage in regions where renewable energy networks are the most developed.

See below for a summary of the plan, and the management discussion and analysis for the second quarter of 2021 for an update on the progress made during the quarter on the various initiatives related to the plan.

To successfully execute its 2025 Strategic Plan and achieve its financial objectives, the Company relies on its strong expertise in developing projects of various sizes in markets with complex development processes, which is a key asset when it comes to taking advantage of opportunities in increasingly competitive markets such as solar energy.

The Company has a pipeline of projects at various stages of development defined on the basis of clearly identified criteria, totalling 3,075 MW in wind and solar projects and 190 MW in energy storage projects, as well as a 630 MW Growth Path, as illustrated below.

To ensure that the execution of the strategic plan results in disciplined growth and the creation of shareholder value, Boralex management is monitoring the criteria used to develop the 2025 corporate objectives described below. See the management discussion and analysis for the second quarter of 2021 for an update on the progress made against the targets.

The Company's Board of Directors has authorized and announced a quarterly dividend of $0.1650 per common share. This dividend will be paid on September 16, 2021, to shareholders of record at the close of business on August 31, 2021. Boralex designates this dividend as an "eligible dividend" pursuant to paragraph 89(14) of the Income Tax Act (Canada) and all provincial legislation applicable to eligible dividends.

At Boralex, we have been providing affordable renewable energy accessible to everyone for over 30 years. As a leader in the Canadian market and France's largest independent producer of onshore wind power, we also have facilities in the United States and development projects in the United Kingdom. Our installed capacity has more than doubled over the past five years and now stands at 2.5 GW. We are developing a portfolio of more than 3 GW in wind and solar projects and nearly 200 MW in storage projects, guided by our values and our approach to corporate social responsibility (CSR). Through profitable and sustainable growth, Boralex is actively participating in the fight against global warming. Thanks to our fearlessness, our discipline, our expertise and our diversity, we continue to be an industry leader. Boralex's shares are listed on the Toronto Stock Exchange under the ticker symbol BLX.

Certain statements contained in this release, including those related to results and performance for future periods, installed capacity targets, EBITDA(A) and discretionary cash flows, the Company's strategic plan, business model and growth strategy, organic growth and growth through mergers and acquisitions, obtaining an investment grade credit rating by 2025, maintaining a quarterly dividend of $0.165 per share, the Company's financial targets and portfolio of renewable energy projects, the Company's Growth Path and its Corporate Social Responsibility (CSR) objectives are forward-looking statements based on current forecasts, as defined by securities legislation. Positive or negative verbs such as "will," "would," "forecast," "anticipate," "expect," "plan," "project," "continue," "intend," "assess," "estimate" or "believe," or expressions such as "toward," "about," "approximately," "to be of the opinion," "potential" or similar words or the negative thereof or other comparable terminology, are used to identify such statements.

Forward-looking statements are based on major assumptions, including those about the Company's return on its projects, as projected by management with respect to wind and other factors, opportunities that may be available in the various sectors targeted for growth or diversification, assumptions made about EBITDA(A) margins, assumptions made about the sector realities and general economic conditions, competition, exchange rates as well as the availability of funding and partners. While the Company considers these factors and assumptions to be reasonable, based on the information currently available to the Company, they may prove to be inaccurate.

Boralex wishes to clarify that, by their very nature, forward-looking statements involve risks and uncertainties, and that its results, or the measures it adopts, could be significantly different from those indicated or underlying those statements, or could affect the degree to which a given forward-looking statement is achieved. The main factors that may result in any significant discrepancy between the Company's actual results and the forward-looking financial information or expectations expressed in forward-looking statements include the general impact of economic conditions, fluctuations in various currencies, fluctuations in energy prices, the Company's financing capacity, competition, changes in general market conditions, industry regulations, litigation and other regulatory issues related to projects in operation or under development, as well as other factors listed in the Company's filings with the various securities commissions.

Unless required by applicable securities legislation, Boralex's management assumes no obligation to update or revise forward-looking statements in light of new information, future events or other changes.

Percentage figures are calculated in thousands of dollars.

Boralex Announces the Commissioning of the La Grande Borne wind...