SAN JOSE, Calif., June 3, 2019 /PRNewswire/ -- Valley Christian Schools' (VCS) students received first place in the Bonus Round of the Shell Ocean Discovery XPRIZE competition in Monaco after previously making history as the youngest finalists ever to compete in any XPRIZE competition. As winners, they've reached another historic milestone by outperforming elite groups of international research institutions and universities. During this three-year competition, teams were challenged to design new technology with the ability to detect chemicals in the open ocean and track them to their source. 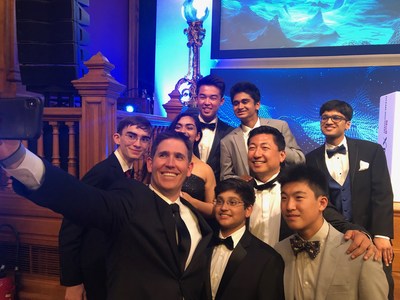 "Winning the XPRIZE competition reinforces the fact that there is no limit to what this younger generation can accomplish when we challenge and invest in them," says Danny Kim, Vice President and Director of VCS' AMSE Institute and team leader for Ocean Quest.

Seven students and three adult mentors traveled to Monaco for the Ocean Discovery XPRIZE Awards ceremony and were thrilled when their name was called as the winner. "For us to participate in the XPRIZE competition has been a fantastic opportunity," says Ansel Austin, VCS junior and Ocean Quest mechanical engineer. "The fact that our team has actually won is above and beyond what we could have hoped for, but it shows that it's OK to dream big!"

The VCS students will fly home to celebrate with the rest of the team, as they reflect not only on their victory, but on the impact this win will have on the future of ocean engineering and young people everywhere.

This unprecedented victory also inspired VCS President Dr. Cliff Daugherty, who says, "I could not be more proud of each student's determination to persevere against all odds and inspire others to discover the wonders of God's creation."

About Valley Christian Schools:Valley Christian Schools (VCS) is a private, K-12 Christian school located in the heart of Silicon Valley in San Jose, California. VCS provides rigorous, college-preparatory programs while challenging students toward lives of character, service and influence in their individual Quest for Excellence™.