This investment, the company's biggest in North America, is part of an investment plan involving more than $300 million initiated in the past few years

BOUCHERVILLE, QC, Sept. 30, 2019 /PRNewswire/ - Bridor, the leading European-style bakery in North America, is announcing an investment of CAD $200 million over a period of five years in its North American production plants. In all, $170 million has been earmarked for its Boucherville plant. At the end of the project, this substantial amount will have enabled the company to expand its building and install new production lines to increase its pastry production capacity by 68% as of next year. This is backed by a recruitment plan for the creation of nearly 200 jobs in Canada and the U.S. Fully half of those jobs will be in the Boucherville plant. 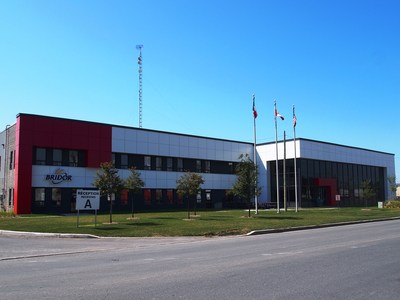 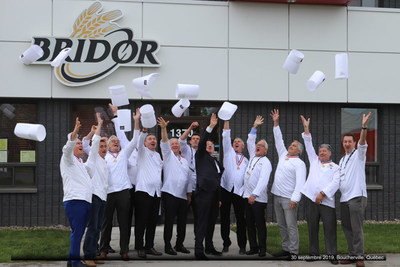 The new announcement consolidates the leadership position that Bridor has built in the industrial bakery sector over the 35 years of its existence in North America. "Bridor has been constantly innovating in a very competitive sector to maintain its sustained growth and leadership and continues to double its turnover every five years," says Philippe Morin, Bridor's general manager. "With a worldwide presence, we want to continue to share our expertise with the largest number of people possible and keep offering our clients the best there is in terms of baked goods."

North America is a key market for Bridor to reach the global billion euro turnover milestone set for 2021.

The investment was announced during Bridor's 35th anniversary celebrations on Monday, September 30 in the presence of Louis Le Duff, Founder and President; Pierre Fitzgibbon, Member of Terrebonne and Minister of Economy and Innovation; Nathalie Roy, Member for Montarville and Minister of Culture and Communications; Kareen Rispal, France's ambassador to Canada; Sophie Lagoutte, France's Consul General in Montreal; and Jean Martel, Mayor of Boucherville as well as several business partners who came from far and wide to attend the function.

"More than ever, the Quebec government is trying to welcome and encourage foreign companies that contribute to the economic growth of the entire province. For the past 35 years, Bridor has contributed to making Montérégie a major player in Quebec's agri-food industry. It is to Quebec's credit to be able to count on a company of such calibre. That is why we are supporting this investment project, through which Bridor can continue its expansion here and internationally," says Pierre Fitzgibbon, Minister of Economy and Innovation and Minister Responsible for the Lanaudière Region.

"I wish Bridor great success and I am delighted by the visit of the 20thdelegation of companies from Brittany. Increasing economic relations between France and Quebec is Premier François Legault's priority. The large delegation of companies from Brittany in Quebec contributes significantly to the fulfilment of this objective," adds Nadine Girault, Minister of International Relations and La Francophonie.

Bridor has more than 800 employees, of whom 600 work in Canada and 200 in the United States. The Boucherville plant is the only one benefiting from the unique expertise of an in-house research and development centre featuring some fifteen talented, experienced bakers. Among its qualified workers, 30 quality control experts are on duty daily to make sure clients enjoy products of the best quality which consistently meet the strictest food safety standards. They provide a backdrop of excellence for the manufacture of some 700 types of products bearing the Bridor name in Canada and the U.S.

"Bridor's success lies in the quality of its workforce, sense of innovation and state-of-the-art industrial technology," says Louis Le Duff, President and Founder of the Le Duff Group and Bridor. These assets enable us to offer the highest quality products which perfectly meet the needs of both local and international clients." This announcement is a reflection of the Group's ambitions in North America, where it has a sales figure of $1 billion and Bridor expects an annual growth of 25%.

"This news is all the more encouraging because through this growth, we can foster solid and lasting relationships with our local business and economic partners," adds Pascale Closson-Duquette, Vice-President and Spokesperson for Bridor North America. "Our financial health allows us to remain a major employer on Montreal's South Shore, in a strategic location just 15 minutes away from Montreal."

Please note that the Boucherville plant project is part of Bridor's overall development strategy for North America and the world. Investments will also be made at the same time in the U.S., more specifically in the Bridor plant in Vineland, New Jersey.

The food processing company operates industrial bakeries in Canada and the United States and markets the Bridor and Au Pain Doré brands. Bridor supplies major distributors, as well as grocery, restaurant and hotel chains in both Canada and the United States. This pioneer company has an in-house research and development department and operates four bakeries in North America with over 800 employees, more than 600 of whom work in Canada. Bridor is part of the Le Duff family group: a business with sales of more than €2 billion, nearly 1,800 restaurants around the world and 35,000 employees.