HOLLYWOOD, Calif., April 28, 2020 /PRNewswire/ -- Kenn Viselman, multi-award winning producing rebel of the children's entertainment world, with over $20 Billion Dollars in commercial success, best known for his work on several megahits including Teletubbies, Thomas the Tank Engine, Noddy, Eloise and many others, announced today he, along with Brooklyn Weaver (Extant, Reverie, Run All Night), is bringing International Superstar, Moonzy, to the Americas under his itsy bitsy Entertainment banner. The irresistible & irrepressible Moonzy is soaring towards an astonishing 9 BILLION VIEWS on YouTube, is the highest rated children's series throughout parts of Europe and most recently in China on CCTV Kids now has his sights set on the Americas. 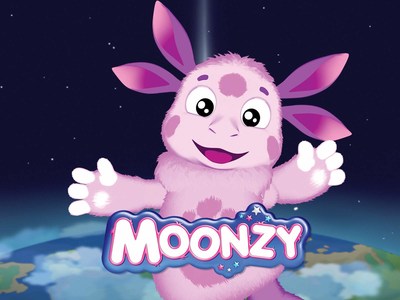 Moonzy has more views than the total of Disney, Nickelodeon & PBS Kids' official YouTube pages combined and is one of the most viewed preschool series in history.

"I have been blessed to work, in many capacities, with the most original and exciting children's properties and creators of all time," said Kenn Viselman, "and yet I have NEVER seen a response like this before. Moonzy is truly a phenomenon. At his core, he is simply filled with Love & Laughter and that is something the entire world is clamoring for right now. I believe Moonzy is positioned to be the biggest furry friend of my career."

Weaver commented, "I have never been drawn to a children's property with the intensity I have with Moonzy. I'm really excited to help Kenn share him and his adventures with our side of the world."

In addition to Weaver, Viselman pulled together many of his former Teletubbies Team including Emilia Nuccio and Marcio França Domingues because of what he believes will once again be pandemonium when Moonzy is released in the Americas.  The deal includes all rights for broadcast and the general exploitation of the property including merchandising and promotions from the top of Canada to the base of South America and all US possessions worldwide and was negotiated by Anne Jordan of the Jordan Group in Brentwood California.

Kenn Viselman presents… is a Global Entertainment Company committed to creating wonderfilled family entertainment which is engaging, entertaining, enlightening and shares a message of LOVE.