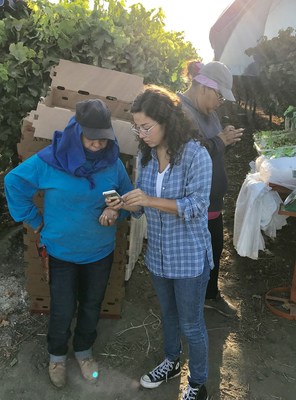 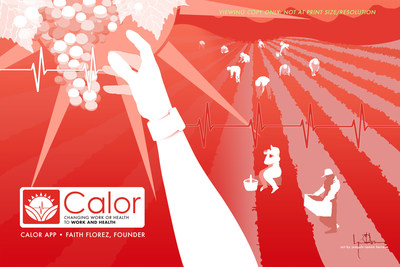 Calor, conceptualized and created by 18-year-old Faith Florez, alerts farm workers about their health in hot weather. From 1992 through 2016, exposure to excessive environmental heat killed 783 U.S. workers and injured over 69,000 workers according to the Bureau of Labor Statistics. Farm workers are especially vulnerable because they are often poor and are afraid to take the breaks for water and shade that they are entitled to.

Calor helps protect workers with an Apple Watch app that alerts them of weather conditions and when to hydrate and take legally mandated breaks. It allows workers to receive notifications with educational videos about what to wear, eat, and drink to prepare for a shift in the fields. The app also functions as an emergency hotline to 911 if a worker is in need of medical assistance in often remote fields.

This app is the first project of the Latina Legacy Foundation, a 501(c)3 organization founded by Florez, to empower young women to address social justice issues in Latino communities. In 2017, Florez was named a national HERLead Fellow, allowing access to initial funding for Spanish and English language videos. Florez also worked with a team of student developers at the USC Viterbi School of Engineering to code the original concept app.

Florez spent her childhood in Shafter, California, a small farming community in the Central Valley. The USC freshman is descended from farm workers, and her great-grandmother died of heat illness.

"Being able to create Calor is meaningful for me and my family. I have always heard about the dangers in the fields from my elders, and my great-grandma paid the ultimate sacrifice for her work. I want to make sure that other families don't have to endure that pain and that workers do not have to sacrifice their health for their work," Florez said.

Florez has raised over $60,000 to launch Calor, and the funds raised were used to partner with FocusMotion to develop a unique, qualified methodology for tracking farm worker health and activity, creating an efficient solution that benefits both the farmers and the workers. Calor has been piloted on three farms in California's Central Valley.