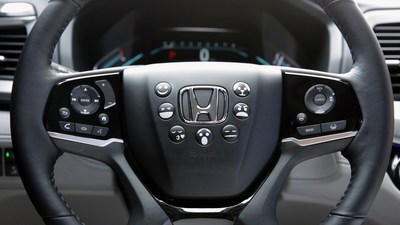 Integrated into the steering wheel of the new 2018 Honda Odyssey, Honda Horn Emojis are easy to access and safe to use in a multitude of situations, such as the Rush Hour Traffic emoji, which helps share the pain of being stuck in traffic with other drivers. Honda Horn Emojis also include the Happy Honda Honk emoji that enables the driver to say "hello" to passersby, and the Honda Dog emoji, which is silent to humans but warns canines of approaching vehicles, among others.

"Horns have been around for over a century, but little has been done to make these sound-making devices a personal expression of the driver's emotions like we're doing with the all-new Honda Odyssey," said Alice Alerto, the Honda engineer in charge of horn development. "We have exhaustively researched and tested these new Honda Horn Emojis to offer the industry's most advanced in-vehicle technology in the minivan segment."

To make a more personal and expressive horn, Honda utilized data compiled by social scientists and audiologists to identify situations in which the horn can best communicate the driver's emotions, and through their findings, developed sounds to express specific emotions that are deployed through the new Honda Horn Emojis.

Research showed that anger is the number one reason the driver uses a standard horn. Honda's goal was to take horn expression to the next level by expanding the emotional spectrum into other audio-based gestures such as happiness, love and empathy. Through the rigorous development process, Honda engineers have achieved a seamless transition from a traditional horn to Honda Horn Emojis. Honda Horn Emojis were developed by Honda Dream Labs, the same creative folks behind the HondaVac, the world's first in-car vacuum that debuted in the previous generation Odyssey minivan.

Honda Horn Emojis will come standard on the 2018 Honda Odyssey, and join the available advanced connectivity and technology features that will debut on the sleek, sophisticated and innovative new 2018 Odyssey this spring.

The all-new 2018 Honda Odyssey was designed and developed by Honda R&D Americas. The Odyssey and its 280-horsepower 3.5-liter i-VTEC™ V-6 engine will be manufactured exclusively at the company's Lincoln, Alabama plant using domestic and globally sourced parts. The Odyssey's all-new 10-speed automatic transmission will be produced at the company's plant in Tallapoosa, Georgia. The 2018 Odyssey is the second generation Odyssey to be designed and developed in North America and the fourth generation to be manufactured exclusively in North America.

Honda offers a full line of reliable, fuel-efficient and fun-to-drive vehicles with advanced safety technologies sold through over 1,000 independent U.S. Honda dealers. The Honda lineup includes the Fit, Civic, Accord and Clarity Fuel Cell passenger cars, along with the HR-V, CR-V and Pilot sport/utility vehicles, the Ridgeline pickup and the Odyssey minivan.

Honda has been producing automobiles in America for 34 years and currently operates 19 major manufacturing facilities in North America. In 2016, more than 96 percent of all Honda vehicles sold in the U.S. were made in North America, using domestic and globally sourced parts.

This release is an April Fools' release and should be taken as such by readers and the media.