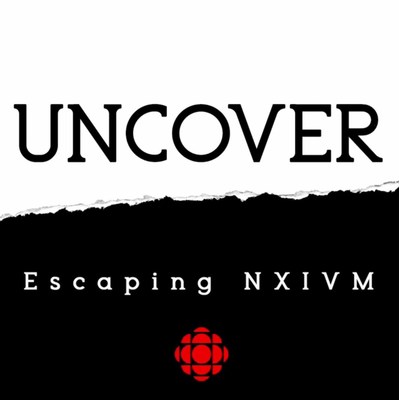 CBCPodcasts expands its investigative/true crime category with new series, UNCOVER.  Launching on September 5, season one — ESCAPING NXIVM — is a seven-episode deep dive into NXIVM (pronounced nexium), billed as an international self-help group, but ultimately alleged to be a sex cult. CBC documentarian Josh Bloch drives the year-long investigation into the organization that attracted the attention of actors, millionaires, and even a visit from the Dalai Lama. At the heart of Season One: The story of how one woman went from star recruiter for the group to a key force in the fight to take it down. Watch the video trailer and listen to the audio trailer. Follow on social media: @uncovercbc.

CBC's first foray into audio fiction is THE SHADOWS, a six-episode series launching September 25. Created and presented in partnership with award-winning audio creator Kaitlin Prest, THE SHADOWS is a fictional series that explores the anatomy of a relationship. It follows Kaitlin, a young artist struggling to make great work and find great love. She believes that the love depicted in Hollywood movies is real, and that she will be one of the lucky ones to find it. When she falls for someone who challenges her romantic ideal, she is faced with an impossible choice, and a decision that can't be unmade. Learn more here and via social media (@kaitlinprest @TheShadowsCBC).

After their respective launches, both podcasts can be downloaded via cbc.ca/podcasts.

The full Fall 2018 docket of CBC Podcasts include returning favourites: new stories from critically acclaimed podcast LOVE ME (Season 3); more real-life therapy from the chart-topping podcast OTHER PEOPLE'S PROBLEMS (Season 2); a new season of the true crime hit SOMEONE KNOWS SOMETHING (Season 5); plus, hit indie podcast THE SECRET LIFE OF CANADA, which brings never-before-heard episodes to its new home with CBC Podcasts.

THE SHADOWS' Kaitlin Prest will be a keynote speaker at the Third Coast Festival (Oct. 4-6) and, this November, CBC Podcasts will be the lead sponsor of the Hot Docs Podcast Festival in Toronto (Nov. 1-5) and the Vancouver Podcast Festival (Nov. 8-10).

From Canada's public broadcaster, CBC PODCASTS is a richly diverse collection of award-winning podcasts that engage, enlighten and entertain. CBC is the #1 podcaster in Canada, reaching more Canadians than any other podcast publisher. With more than 20 series in genres such as true crime, comedy, human interest and audio fiction.

About CBC/Radio-CanadaCBC/Radio-Canada is Canada's national public broadcaster. Through our mandate to inform, enlighten and entertain, we play a central role in strengthening Canadian culture. As Canada's trusted news source, we offer a uniquely Canadian perspective on news, current affairs and world affairs. Our distinctively homegrown entertainment programming draws audiences from across the country. Deeply rooted in communities, CBC/Radio-Canada offers diverse content in English, French and eight Indigenous languages. We are leading the transformation to meet the needs of Canadians in a digital world.