HEFEI, China, Jan. 25, 2020 /PRNewswire/ -- As China, a country that is gaining prestige and influence as a rising economic power, is attracting the attention of the whole world, traditional Chinese holidays are gradually becoming events that are celebrated in every corner of the globe. With the Lunar New Year holiday celebrating the arrival of the Year of the Rat fast approaching, Chinese leading brand-Chacha once again appeared on the large NASDAQ screen overlooking New York's Times Square, sending New Year greetings to Chinese communities worldwide. 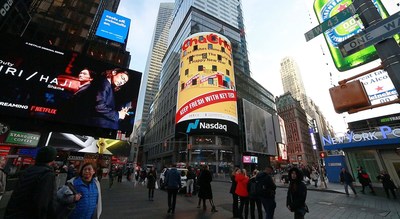 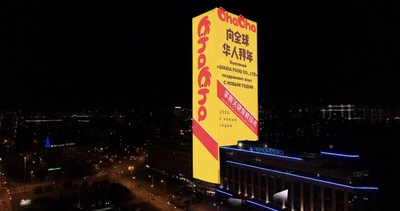 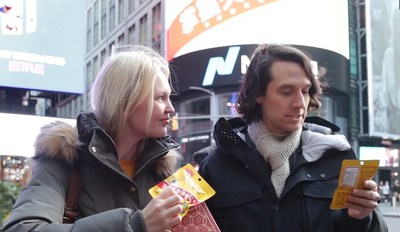 Some countries export products while some have become influential at exporting culture. As a representative of Chinese iconic brands, Chacha has, for the fourth consecutive year, chosen Times Square, well-known worldwide as the Crossroads of the World, as the locale from which to issue Chinese New Year greetings, touching the hearts of people all over the world.

Chacha's communication efforts go far beyond the famous intersection at 42nd Street and Broadway. From 2017, Chacha started sending out the annual greetings from landmarks in 10 of the world's key cities, including New York (US), Toronto (Canada), Sydney (Australia), St. Petersburg (Russia), Tokyo (Japan), Seoul (South Korea), Kuala Lumpu, (Malaysia), Singapore, Jakarta (Indonesia) and Bangkok (Thailand). Chacha issued the message in both Chinese and the languages spoken in the destination city, telling the story of the traditional culture behind Chinese nuts.

What kind of sparks will fly when products that are specially sold before and during Chinese New Year land on the streets of New York? Two passers-by from France, Sydni and Paisen, marveled, "The packaging is so cool that I didn't recognize that it was nuts! It's really different from what I imagined traditional Chinese food to be. It's fashionable and trendy!" When she and her friends opened a bag of Small Yellow Bag Daily Nuts, they were immediately overwhelmed by the rich variety and fresh, crisp taste. In the past, all they knew about what Chinese do during the holiday is that they set off firecrackers, go to temple fairs and eat dumplings at a reunion dinner. Today they had gained a new understanding of the modern way of celebrating Chinese New Year.

Bryan, a San Francisco resident, said when he received the Chacha New Year gift package, "Chinese culture has become very popular around the world. Many of my Chinese friends get together and make dumplings during the period, then serve them with a lot of food and snack treats. I often shoot a video and upload it to Facebook in order to show all of my friends how to enjoy Chinese nuts."

A male fashionista, who happened to pass by on the street, tasted the nuts as soon as he received the special Chacha New Year (inclusive of a bag of Small Yellow Bag Daily Nuts) put together in collaboration with a famous brand designer. He said that Chinese people are very smart. The design helps ensure the fresh and natural quality of the nuts for a longer time. Unlike pies and cakes we take as a gift when we visit our friends or families during holidays, Chacha nuts are much healthier.

As Chinese culture becomes more well-known around the world, traditional Chinese New Year snacks, such as melon seeds and nuts, have evolved into a popular snack worldwide. What does every person in the middle of their daily routine want when it comes to food? Undoubtedly, the answer is taste and freshness. To respond to the needs of demanding consumers, Chacha is committed to its strategy with a focus on creating fresh products, supported by its capabilities across the industry chain and advanced technologies. The company selects A-class seasonal nuts from plantations around the world and makes them available to shoppers everywhere after being processed in accordance with the unified and rigorous standards that are applied in order to maximize the quality and freshness of the products at Chacha's nine manufacturing facilities worldwide.

Chinese New Year is far beyond a holiday in China and the special purchases that every family makes in preparation for the event are far beyond simply being "food". Stocking up for Chinese New Year is the first important step for Chinese when getting ready to celebrate the important annual event. Nuts and melon seeds, among other popular snacks, and the New Year's Eve dinner, are the ways in which Chinese people show their respect for everything that happens in their life.

Based on the tradition of purchasing holiday goods for the Spring Festival (the other name of Chinese New Year) in China, well-known 20-year old snack brand Chacha Food, has launched the Daily Nuts series, empowering the company to beat other competitors and become a leading nut snack brand in China.

Nowadays, returning home for the Chinese New Year with a box of Chacha nuts has gradually become a new tradition in the country. Nevertheless, Chacha's potential is far beyond that. The Chinese nuts market is expected to experience explosive growth over the next ten years as the country's annual per capita consumption of nuts now stands at a mere 221 grams compared with about 6.6 kilograms in the US. As a result, the market offers huge growth potential as the consumption in China only accounts for one third of that in the US even though China is ten times larger.

Given this scenario, nearly all Chinese snack manufacturers are exploring effective ways to take the leading position in the Chinese nut snack segment. The key to Chacha's success is that the company has accumulated many years of experience in creating premium products and expanding sales channels in addition to its ongoing efforts in product positioning and resource integration.

With the rise of the Chinese economy and the world's interest in Chinese culture, Chacha has exported its nut products in time for Chinese New Year to the rest of the world, becoming a vehicle through which the message of a modern China is conveyed, alongside the brand's success in the domestic market.

Currently, Chacha has expanded into international markets with its nut products exported to more than 40 countries and regions worldwide. The company's current focus is on the key markets of the US and Indonesia where the company boasts the largest sales. The brand's success in these two are very different, but very important markets is a strong testament to its international strategy and corporate competence. The question then becomes, how can small Chacha nuts satisfy the taste buds of shoppers worldwide?

In addition, Chacha is also implementing a localization strategy, which focuses on addressing the tastes of local consumers, with the aim of strengthening consumer resonance and accelerating expansion into overseas markets. In Thailand, Chacha Food rolled out a coconut-flavored melon seed product. The product has now become one of the most popular snacks in Southeast Asia.

Chacha's business growth is reflected in data. The company has expanded its presence into over 40 countries and regions across the world, including Russia, the US and Southeast Asia. In 2019, Chacha started operation of its new plant in Thailand. With the new facility, the company aims to increase the contributions by overseas markets to its total sales to between 30% and 40%.

The Chinese believe that stocking plenty of goods in preparation for celebrating Chinese New Year ensures they will reap the harvest of their hard work over the coming year. Chacha, one of the iconic makers of Chinese New Year snacks, has expanded its presence beyond Southeast Asia to the wider European and US markets, serving as a model for sharing China's leading brands with the world.