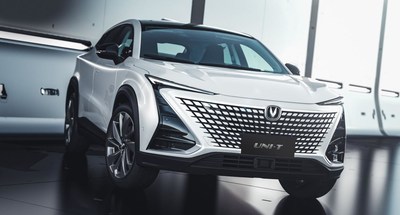 Changan UNI-T instantly stunned the car industry as soon as the vehicle made its debut at the live launch. In terms of aesthetics, the UNI-T has broken the boundary of the traditional look and feeling of a car, creating an exciting "fashion-forward" design for the front of the vehicle by way of a borderless grid. The trapezoid-cut diamond look of the front end forms the basic concept around which the silhouette of the entire vehicle evolves, forming an integrated whole. Along with the strongly defined LED driving lights and split headlamps, the design has an entirely futuristic feel, causing a lot of excitement among car field fans. The handles are hidden on the front and rear doors, perfectly blending into the motion and tension of the body curve. The V-shape tail wing is not only stylish and bold, but also guides the air flow, yielding an eye-catching design that combines both aesthetics and functionality.

Changan UNI-T also balances technologies with simplicity in the interior design. The integrated dual 10.25-inch high-definition touch screen, along with the simple button layout and smart central control line, delivers an aesthetically pleasing interface for the operation of the vehicle. The horizontal shift handle, modeled on the design of the spaceships of the future, gives a full scientific styling mixed with advanced principles.

Changan UNI-T's intelligent vehicle system, equipped with an AI chip, highlights the landmark human-computer interactive experience. A bright screen, coupled with the fatigue and facial recognition system for the driver, enables a more precise, efficient and comfortable human-computer interaction. Based on a deep understanding of driver expectations, the vehicle gives everyone sitting in the vehicle the feeling of having entered a futuristic science fiction world, an aspect that will appeal to new-generation young consumers.

Once autonomous driving becomes a reality in China, Changan plans to fully introduce the L3 self-driving system into the UNI-T. In a first iteration, the driver will not need to continually keep his or her eyes on the road, and, in a later iteration, the driving experience will move to the hands-free and feet-free stage. Supported by some of the most robust technologies available today, the new vehicle comes loaded with a wide range of new features, including automated vehicle following, automated lane-changing and intelligently recommended lane changing. The vehicle is expected to lead the way in going intelligent across China's auto industry.

Changan UNI-T, which breaks the existing perception of SUVs, is a major revolution in design and technology among vehicles made by Chinese automakers. The vehicle is one of the most intelligent and technologically advanced SUVs in the Chinese auto market, with a high level of expectation that it will prove to be highly popular among young consumers.