MCLEAN, Va., Dec. 17, 2019 /PRNewswire/ -- Unless lawmakers pass legislation soon to save struggling multiemployer pension plans, it may be too late for some.

As many as 117 multiemployer pension plans covering 1.4 million participants are underfunded by $56.5 billion and have informed regulators and participants that they could fail within the next 20 years because they don't have enough money to pay the full promised benefits.  Seven plans already failed in the past year when they became insolvent or terminated after all the employers withdrew. 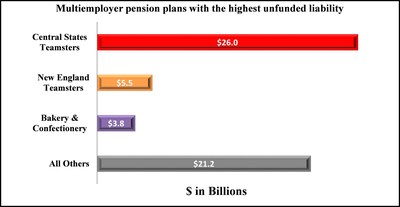 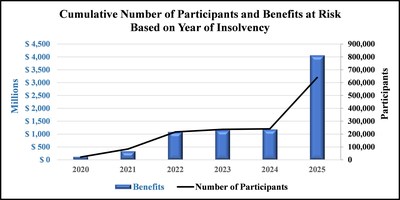 These are the highlights of a new analysis by Cheiron Inc., the actuarial consulting firm, based on the latest annual financial reports filed by multiemployer pension plans with regulators.

"If Congress doesn't act soon, many more plans will fail and participants will lose their pensions," said Joshua Davis, a principal consulting actuary at Cheiron who analyzed the filings. "Meanwhile, plans that are already well-funded are becoming financially healthier," he added.

As many as 12 more multiemployer pension plans expect to become insolvent by 2020. A total of 44 plans have said they will fail by 2025, when the Central States, Southeast and Southwest Areas Pension Plan, the largest underfunded plan, expects to run out of money.  The Pension Benefit Guaranty Corporation, the federal agency which guarantees participants a minimum pension even if their plans fail, has said that it expects its insurance program for multiemployer pension plans will run out of money in fiscal 2025.

Cheiron's November 2018 study found 121 multiemployer pension plans underfunded by $48.9 billion, based on the latest available regulatory filings. The amount of underfunding has since increased by $7.7 billion or 15.7 percent. The plans in the 2019 study have total assets of $41.8 billion and liabilities of $98.3 billion.

The number of struggling multiemployer pension plans would have increased to 124 in the 2019 study but seven fell off the rolls in the past year when they failed or shut down. A few plans also improved their financial outlook after the Treasury Department approved letting them cut benefits for retirees under the Multiemployer Pension Reform Act.

All the financially distressed multiemployer pension plans are in what is known as "critical and declining" condition and have informed regulators that they expect to become insolvent within 20 years, as required by the Multiemployer Pension Reform Act of 2014.

The multiemployer pension crisis developed because of the Great Recession, industry deregulation, a smaller unionized workforce resulting in fewer active participants in declining industries, and employers exiting the system through bankruptcies or by withdrawing, leaving the remaining employers responsible for the unfunded liabilities.

Multiemployer pension plans, also known as Taft-Hartley plans, are industry plans that cover unionized workers and pensioners. They are jointly sponsored by employers and labor unions.