GUANGZHOU, China, March 1, 2018 /PRNewswire/ -- The American Chamber of Commerce in South China ("AmCham South China") today released its 2018 White Paper on the Business Environment in China and 2018 Special Report on the State of Business in South China.

The 533-page 2018 White Paper, now in its tenth year, presents a highly researched, exhaustively cited account of the on-the-ground business environment in China. The 2018 Special Report, meanwhile, aggregates and analyzes the experiences of 244 companies who participated in the Chamber's annual Study of State of Business. 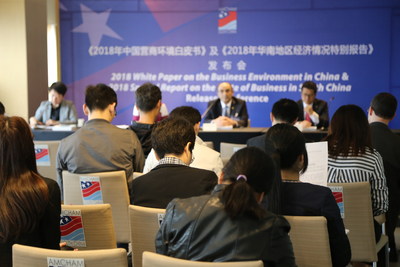 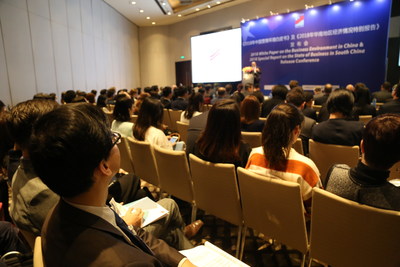 "The good news is that foreign companies are cautiously more optimistic as the central and local governments are giving signals that they will open up the market and welcome more foreign investment," said AmCham South China President Dr. Harley Seyedin. "During the 19th National Congress of the Communist Party of China, Chinese President Xi Jinping said that all businesses registered in China will be treated equally. We applaud President Xi's words and thoughts as we look forward to a more level playing field where we can all profit together." The 2018 White Paper shows that so far, Guangdong government is the most responsive with the December 2017 release of "Policies and Measures of Guangdong Province on Further Expanding Opening-up and Actively Attracting Foreign Direct Investment (FDI)", commonly known as Ten Measures for Attracting FDI. Guangdong government is showing a more open approach toward foreign investment, particularly in attracting high-level talents.

Among many topics, the 2018 White Paper discusses the impact of foreign-invested enterprises on China's economy. For example, foreign companies help generate one-third of China's GDP and over one-quarter of its employment. U.S. companies and their ripple effects through China's economy contribute more than 180 times the value of the usual measure of USFDI inflow, and 11 times the net profit of U.S. firms, to China's GDP each year.

The 2018 Special Report demonstrates that China remains popular for international investment due to its potential for global market growth. For most of the respondents (53.3 percent), China accounted for the top spot in their global investment plans. Roughly 90 percent of participants reported being profitable already with most of the remaining companies expecting profitability within two years or less. Meanwhile, nearly 70 percent believed their overall return on investment in China in 2017 was better than elsewhere.

This year, Guangzhou ranked as the most popular investment city within a list of 44 cities in China, followed by Shenzhen, Shanghai, and finally Beijing. Guangzhou and Shenzhen have worked hard to achieve the coveted top spots in our Special Report for the first time. A couple of other cities located in the area, however, have sunk to the bottom of the list because they are focused on taking land that rightfully belongs to foreign-invested enterprises. These cities are attempting to make quick profits from real estate development rather than focusing on the future by keeping those enterprises and their newly developed technologies.

The increased optimism seems to have also affected reinvestment budgets. The report shows that the budgeted reinvestment from corporate profits in China by members of AmCham South China is expected to rise by nearly 12 percent with an estimated reinvestment budget of US$14 billion to expand existing operations and to capture new and larger market shares. Also, the number of those who transferred their South China reinvestments to other markets in 2017 decreased by approximately one-fourth year-on-year.

Most companies surveyed claimed the top three business challenges in South China were "increasing human resource costs", "shortage of qualified talent", and "fierce local competition" - and that the biggest regulatory challenges included "tax policy", "government procurement policy", "cybersecurity regulations", "customs compliance", and "standards, certification, and conformity assessment" - there was a remarkable increase in the number of respondents interested in setting up new offices or facilities in the free trade zones in Southern China, of which more than 55.2 percent indicated their preference in Guangdong Nansha Free Trade Zone, followed by its counterparts in Qianhai, and Hengqin.

Both documents may be downloaded free of charge from the Chamber's website at www.amcham-southchina.org.

The White Paper on the Business Environment in China offers a summary of China's impressive accomplishments since the "Opening Up" and examines the key influences on the business environment in present-day China, such as national policy initiatives and the global economic crisis.

The Special Report on the State of Business in South China is a quantitative Study of the business environment, conducted for consecutive years by AmCham South China. Each year, AmCham's member and non-member companies participate in AmCham's State of Business Study, results of which will be garnered and edited into a separate publication.

Both documents may be downloaded free of charge from the chamber's website: