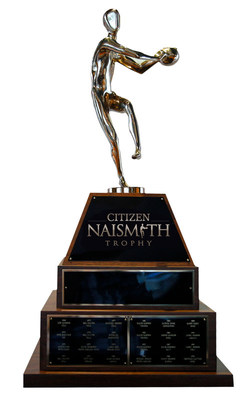 The Citizen Watch Naismith Trophy, presented since 1969 annually to the most outstanding men's and women's college basketball player nationwide, will focus on those in contention for the award, with a "watch" announcement to emphasize player movement, specifically the 50 watch list, 30 midseason team, 10 national semifinalists, four finalists and the winner.

With the Citizen Watch Naismith Trophy celebrating its 50th anniversary in 2018, Citizen will spearhead a "moments in time" campaign, honoring the players and moments that shaped and established the trophy as the most prestigious individual college basketball player award, culminating at the 2018 Men's Final Four in San Antonio when the Citizen Watch Naismith Trophy will recognize all previous winners over the last 50 years.

The amplification of this program and much of the in-season activations will be realized by both parties through social media and display advertising campaigns, spotlighting the "Naismith Trophy Player of the Week," and "What to Watch For" - an enhanced version of the existing "Matchup of the Week".

Included in the partnership are Citizen advertisements that will be featured in PSP's gameday media at over 2,000 college basketball games during the regular and post-season.  The integrated program also includes a significant branded content component that will be created by the PSP design and editorial department.

"Citizen is known for producing high-end quality watches that accentuate superior performance, unparalleled technology and prestige.  Citizen's core values match the attributes of our Naismith Trophy winners who are basketball's finest," said Eric Oberman, executive director of the Atlanta Tipoff Club. "Through this partnership we will honor our most treasured asset – former Naismith Trophy winners – while also celebrating current athletes for their passion to achieve basketball excellence."

"Citizen is a brand that currently supports young students with academic scholarships through its corporate sponsorship of the National Merit Scholarship Foundation," said Eric Horowitz, U.S. managing director of Citizen Watch. "Citizen is proud now to extend its connection to college students with the Citizen Naismith Trophy Award recognizing the impressive efforts of college athletes and rewarding their sacrifices and work both on and off the court. We are happy to be partnering with such a wonderful organization and hope to create together many moments that will further our common interest and passion in advancing the goals of college student athletes."

New this year, fans have the opportunity to vote for the Citizen Watch Naismith Trophy winner by visiting www.naismithtrophy.com/vote Voting ends at 11:59 p.m. EDT on March 31 and fans are limited to one vote per day.  The fan vote will account for 5% of the total vote.

The 49th presentation of the Citizen Watch Naismith Trophy will be announced on Sunday, April 2, 2017, at the Naismith Awards Brunch delivered by UPS at the Final Four in Scottsdale, Ariz.  The entire awards presentation will be broadcast live at www.facebook.com/NaismithTrophy and also simulcast on Sirius XM College Sports Nation, Channel 84.

About the Atlanta Tipoff Club Founded during the 1956-57 season, the Atlanta Tipoff Club is committed to promoting the game of basketball and recognizing the outstanding accomplishments of those who make the game so exciting. The Atlanta Tipoff Club administers the Naismith Awards, which have become the most prestigious national honors in all of college basketball. Named in honor of Dr. James Naismith, inventor of the game of basketball, the Naismith Trophy recognizes the top Men's and Women's College Basketball Players and coaches, as well as Boy's and Girl's high school basketball players and coaches.  Additionally, lifetime achievement awards are presented annually to overall contributors and college officials. The Naismith Trophy was first presented to UCLA's Lew Alcindor (later known as Kareem Abdul-Jabbar) in 1969.

About Citizen WatchAs a true manufacture d'horlogerie, CITIZEN integrates a comprehensive manufacturing process that extends from creating a watch's individual components to its final assembly.  We operate in over 130 countries across the world.  Since our founding in 1918, we have continued to explore new possibilities of a watch through our constant development from the world's first light-powered technology, Eco-Drive, to the state-of-the-art satellite wave watch, based on our belief, "Now is the time to start to make the world better," summarized in our brand statement, "BETTER STARTS NOW."  CITIZEN will continue to push the boundaries for the future of watches.