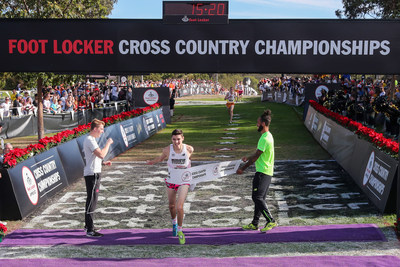 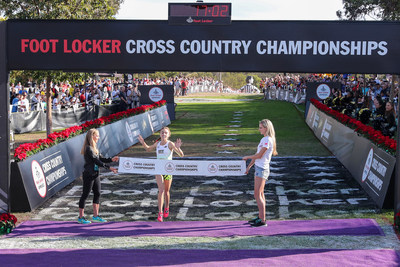 In the girls' 5K race, Claudia Lane successfully defended her 2016 FLCCC national title with a wire-to-wire victory in 17:03.4. With the win, Lane became FLCCC's ninth two-time champion in its history. In the boys' 5K, Dylan Jacobs took control at the halfway mark, en route to a 15:19.7 victory.

Lane, still only a junior, jumped out to a sudden lead in the girls' race and sailed through a mile split of 5:17. A well-formed pack trailed her by 14 seconds with Marlee Starliper (Wellsville, Pa.) at the head. Lane kept the pressure on at the race's halfway mark where the duo of Katelynne Hart (Glen Ellyn, Ill.) and Olivia Theis (Lansing, Mich.) surged past Starliper and initiated a side-by-side charge for second place. Lane, like last year, charged across the final steep uphill/downhill portion of the course and began her push to the finish line. Hart, meanwhile, outkicked Theis over the final 200 meters to finish second (17:22.5) with Theis third (17:22.6). Katherine Lee (Wading River, N.Y.) finished fourth (17:38.3) and Jacqueline Gaughan (Exeter, N.H.) fifth (17:44.6).

In the boys' race, two-time FLCCC national qualifier Jacobs (placed 11th in 2016) waited in a large lead pack that started out conservatively with a mile split of 4:56 with Kashon Harrison (Fruitland, N.M.) in command. After Dalton Hengst (York, Pa.) grabbed a slight lead on the first steep downhill, the race finally began to spread out. It became a two-man duel at the halfway mark, with Jacobs being closely tracked by Daniel Kilrea (La Grange Park, Ill.) through a two-mile split of 9:49. Kilrea managed to nudge ahead briefly before Jacobs made his second big move on the final big hill, leaving Kilrea to fend off the late charges of John Tatter (Winston-Salem, N.C.) and Graydon Morris (Aledo, Texas). In the final mile it was all Jacobs (15:19.7) while runner-up Morris (15:23.3) overtook Kilrea (15:27.3), who held on for third with Tatter crossing the finish line fourth (15:27.9). Jake Renfree (Knoxville, Tenn.) rounded out the top five (15:38.7).