Designed to modernize and enhance the guest experience while providing truly universal access, the space has been revamped so that guests can enjoy an open, modern look and feel.  This is the most significant enhancement to the CN Tower since it opened its doors in 1976. 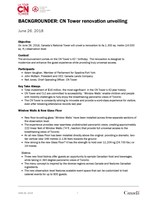 An all new Glass Floor has been installed directly above the original, providing a dramatic, two-tier vertical view 346 metres (1,136 feet) towards the ground.

"It's essential that CN Tower's renovation and upgrades tie into our commitment to accessibility," said John McBain, President and CEO, Canada Lands Company, owner and operator of the CN Tower.

"The Window Walls and new Glass Floor take the visitor experience to the next level and ensure it remains thrilling and unique among the world's greatest towers".

Three new food bistros offer guests an opportunity to sample Canadian food and beverages, while taking in 360 degree panoramic views of Toronto. The new observation level also features scalable space that can be customized to host events for up to 800 guests.

In concert with the renovation of the main observation level, the CN Tower also launched a new, free Viewfinder App for mobile devices. The App features spectacular day and night 360 degree panoramic images of Toronto and surrounding area. Users will be able to identify more than 90 landmarks.  The Viewfinder App is available in in five languages – English, French, Spanish, Korean and Mandarin and is available for download at the App Store and Google Play.

"We are thrilled to introduce an all new observation experience, including the new CN Tower Viewfinder App, as part of our 42nd anniversary" said Neil Jones, Chief Operating Officer, CN Tower.

"The CN Tower enjoyed record breaking attendance last year, but we believe it is important to keep innovating. As a national icon, the experiences we offer our guests should always be at world-class levels. We feel this renovation accomplishes that goal".

CN Tower At a height of 553.33 metres (1,815 ft., 5 inches), Canada's National Tower is an engineering Wonder, award-winning dining and entertainment destination, and has been Toronto's "must-see" attraction for over four decades. The CN Tower was visited by more than 1.98 million people last year. (Includes 370,000 360 Restaurant guests and 18,000 EdgeWalk guests) www.cntower.ca

About Canada Lands CompanyCanada Lands Company is a self-financing federal Crown corporation whose sole shareholder is the Government of Canada. Its role is to optimize the community and economic value obtained from former government properties as well as holding and maintaining select properties on behalf of the federal government. It is a demonstrated leader in attractions management with its operations of the CN Tower and Downsview Park in Toronto plus the Old Port of Montréal and the Montréal Science Centre. www.clc.ca