KNOXVILLE, Tenn., April 25, 2018 /PRNewswire/ -- Just in time for this summer's hottest blockbuster releases, the Coca-Cola and Regal Films program announced the student finalist winners of the 2018 program at CinemaCon in Las Vegas. Clara Montague and Eva Kirie from Ithaca College are the 2018 grand prize winners, and their 35-second film The Library will be shown exclusively at Regal theatres across the country starting in May this summer. 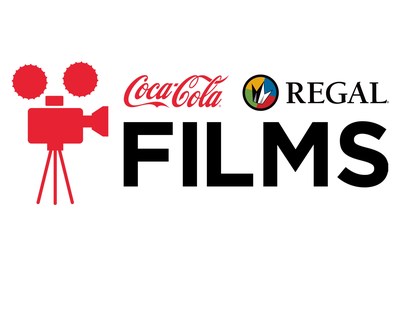 "Through the Coca-Cola and Regal Films program, we are proud to provide talented students with professional filmmaking experience that can help launch successful careers," said Ken Thewes, Chief Marketing Officer for Regal Entertainment Group. "We love watching young filmmakers see their work come to life on the big screen."

"The Coca-Cola and Regal Films program is unique in its benefit to students because it offers real-world experience," said Jason Blum, a two-time Emmy award-winning producer for The Normal Heart and The Jinx and a two-time Academy Award nominee for Whiplash and Get Out. "It's important to support young filmmakers, and this platform gives them a big stage to leap forward and accelerate their careers."

A Red Ribbon panel comprised of Coca-Cola, Regal, Deluxe's EFILM and entertainment and industry representatives selected this year's winner based on set criteria: creativity, creative fit and entertainment value. The winning film will debut at Regal theatres nationwide. In addition, RED Digital Cinema, the program's technology provider, will award the winning filmmaker a RED RAVEN® Camera Kit retail value of $14,999.95 and their school will receive a RED EPIC-W 8K S35 valued at $35,895.00 to foster the next generation of creativity.

"In partnership with Regal, we are proud to support this unique, exciting opportunity for young filmmakers," said Krista Schulte SVP, Strategic Partnership Marketing, Coca-Cola North America. "We are always impressed by the students' creativity, ingenuity and incredible talent throughout the filmmaking process."

The Library Synopsis: A trip to the movies is the perfect study break, and what started out as an idea amongst two friends quickly brings together multiple classmates. Whether people are friends or strangers, the movies, an ice-cold refreshing Coca-Cola and salty, buttery Regal popcorn bring people together.

The film, The Library, can be viewed at https://www.youtube.com/watch?v=3wG4YRrL2Us.

The Coca-Cola and Regal Films program provides unbeatable hands-on experience to young filmmakers. In addition, the program continues to increase the number of participating schools and offers several opportunities for industry executives and talent to support creative students as members of the Red Ribbon panel.

About Regal Entertainment Group: Regal, a subsidiary of the Cineworld Group, operates one of the largest and most geographically diverse theatre circuits in the United States, consisting of 7,321 screens in 560 theatres in 43 states along with Guam, Saipan, American Samoa and the District of Columbia as of December 31, 2017. We believe that the size, reach and quality of the Company's theatre circuit provides its patrons with a convenient and enjoyable movie-going experience. We are committed to being 'The Best Place to Watch a Movie!'

About The Coca-Cola Company:The Coca-Cola Company (NYSE: KO) is the world's largest beverage company, refreshing consumers with more than 500 sparkling and still brands and nearly 3,900 beverage choices. Led by Coca-Cola, one of the world's most valuable and recognizable brands, our company's portfolio features 21 billion-dollar brands, 19 of which are available in reduced-, low- or no-calorie options. These brands include Diet Coke, Coca-Cola Zero, Fanta, Sprite, Dasani, VitaminWater, Powerade, Minute Maid, Simply, Del Valle, Georgia and Gold Peak. Through the world's largest beverage distribution system, we are the No. 1 provider of both sparkling and still beverages. More than 1.9 billion servings of our beverages are enjoyed by consumers in more than 200 countries each day. With an enduring commitment to building sustainable communities, our company is focused on initiatives that reduce our environmental footprint, create a safe, inclusive work environment for our associates, and enhance the economic development of the communities where we operate. Together with our bottling partners, we rank among the world's top 10 private employers with more than 700,000 system associates. For more information, visit Coca-Cola Journey at www.coca-colacompany.com, follow us on Twitter at twitter.com/CocaColaCo, visit our blog, Coca-Cola Unbottled, at www.coca-colablog.com or find us on LinkedIn at www.linkedin.com/company/the-coca-cola-company.

About Deluxe's EFILM:Color artistry and groundbreaking technology come together at Deluxe's EFILM -- where the industry's top filmmakers and up-and-comers have come for three decades. Home to world-class talent and recognized with an Academy Award for Scientific and Technical Achievement, EFILM continually sets creative and technology standards in digital color and finishing for features, episodics and trailers. It also provides location services through custom configured technology solutions and highly skilled field technicians. Part of the Deluxe Creative group of companies, EFILM is able to provide its creative services locally in Hollywood, and via real-time, calibrated color grading sessions between EFILM and Deluxe locations anywhere in the world. www.EFILM.com

About RED Digital Cinema:RED Digital Cinema is a leading manufacturer of professional digital cameras and accessories. In 2006, RED began a revolution with the 4K RED ONE digital cinema camera. By 2008, RED released the DSMC (Digital Stills and Motion Camera) system that allowed the same camera to be used on features like "Guardians of the Galaxy Vol.2" and "The Hobbit" trilogy, television series such as "Stranger Things" and "Godless", and magazine covers like "Vogue" and "Harper's Bazaar". The cameras of RED's DSMC2 line — RED RAVEN, SCARLET-W, RED EPIC-W and WEAPON — combine compact and lightweight design, superior image quality, incredible dynamic range, modularity and cutting-edge performance. The WEAPON camera offers interchangeability across RED's entire line of sensors including its cinematic full frame MONSTRO 8K. For more information, visit www.red.com.