CHICAGO, Sept. 28, 2020 /PRNewswire/ -- Marking the largest industrial development built in Chicago in decades, NorthPoint Development today officially opened Commerce Park Chicago on the City's Southeast Side by cutting the ribbon on the first of five new buildings on the site of the long-defunct Republic Steel mill. 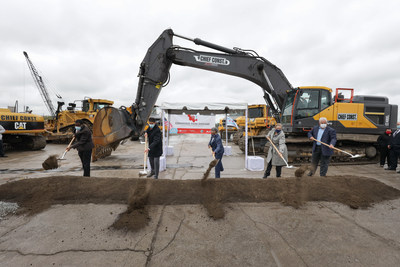 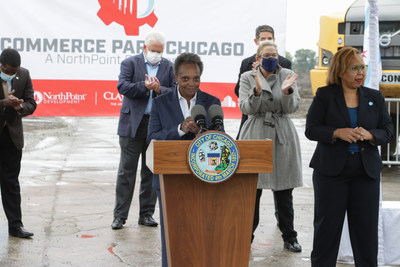 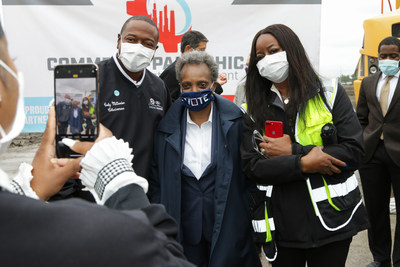 The historic site was first occupied by Republic Steel in 1901, but has remained vacant for nearly 20 years.

"Commerce Park Chicago is an economic engine and jobs generator that is a beacon of hope on the Southeast Side during a time when Chicagoans need good-paying jobs and opportunities as we battle the human and economic impacts of the global pandemic," said Chicago Alderwoman Susan Sadlowski Garza (10th Ward). "The transformation of an abandoned relic to a state-of-the-art industrial hub signifies the beginning of a new era of employment on the Southeast Side that will continue to deliver benefits."

"It's fitting that a Commerce Park Chicago representing the vision of 21st Century industry will replace the once mighty Republic Steel that helped make the Chicagoland a worldwide industrial giant," Congresswoman Robin Kelly (2nd District) said. "I'm hopeful this innovative industrial development is another step toward an economic renaissance in the Southland. I'm also encouraged by NorthPoint's adherence to economic justice, demonstrated by their commitment to ensuring job opportunities for local residents."

"This land, which has languished for decades, is no longer a symbol of decay, but an economic revival that expands far beyond these 200 acres," said state Rep. Marcus Evans (33rd District). "NorthPoint has partnered with organized labor to employ a highly skilled workforce with good-paying jobs and has exceeded workforce requirements that reflect the diversity of the community."

NorthPoint worked closely with Alderwoman Garza and community organizations to ensure opportunities for local employers, sub-contractors and residents. A comprehensive Project Labor Agreement was negotiated with local unions and a community Apprenticeship Expo was held to provide residents a path toward a career in the trades. NorthPoint also worked with the City of Chicago to implement WBE/MBE participation programs that surpassed the City's goals of 6 percent and 26 percent, respectively, bringing more opportunities for Chicago-based women- and minority-owned businesses.

"NorthPoint believes in Chicago, the State of Illinois, its people and communities," said NorthPoint Founder and CEO Nathaniel Hagedorn. "When we started this project, we saw the potential of the City and the Southeast Side. Commerce Park Chicago represents the best in public-private projects and shows the value of what we can accomplish by working together."

"Our mission is to partner, build and manage employment hubs in ways that are both responsive to community needs and attractive to quality tenants," Hagedorn added. "This win-win formula creates quality jobs, contributes to the stability of the local economy, and benefits the entire community."

NorthPoint recently completed its first of five new industrial buildings on the campus – a 360,000 square feet, 32-acre development at 12144 S. Avenue O. The building is one of five structures of up to 1.1 million square feet, which are expected to be completed by 2022. Ford is leasing the first building, which will be used to support its nearby factory.

"As America's top producer of automobiles, Ford is proud of its nearly 100-year history of vehicle production in the City of Chicago," said Tony Reinhart, Regional Director of Community & Government Affairs at Ford. "Ford's continued commitment to the City of Chicago is evident by our recent billion-dollar investment in our Chicagoland plants and the fact that we build some of our most iconic American vehicles, including the Ford Explorer and Lincoln Aviator, here on the South Side."

About NorthPoint: NorthPoint constructs, owns, and manages dozens of business parks and logistics and manufacturing developments throughout the U.S. with tenants that include Adidas, Caterpillar, Chewy.com, Ford, GM, Home Depot, Patagonia, Staples and Ulta. NorthPoint has invested more than $250 million in Illinois since 2017, and over $7 billion nationwide since 2012. In addition to Commerce Park Chicago, NorthPoint is currently partnering with the City of Joliet on Compass Global Logistics Hub, a $2.1 billion warehouse, distribution, and light manufacturing campus. It is also developing a 600-acre, $312 million warehouse and logistics center in Pontoon Beach, IL. NorthPoint also owns and operates four Beyond Self Storage projects in Illinois (Willowbrook, Des Plaines, Naperville, and Arlington Heights) and maintains a central office in Downers Grove.