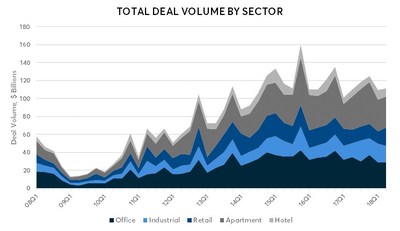 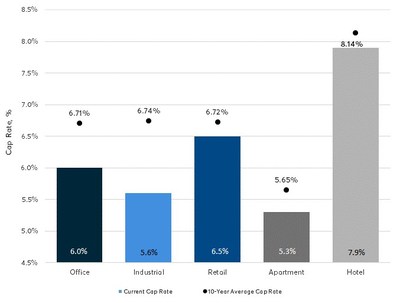 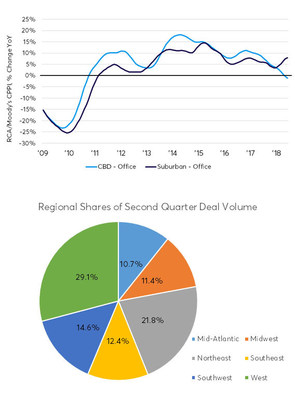 "Overall CRE deal volume remains healthy, with overall deal flow up slightly amid variations across the different property segments," said Ten-X Chief Economist Peter Muoio. "It appears that the bid-ask price gap between sellers and buyers has diminished, aiding the market as a whole, but investors continue to digest shifting fundamentals across the property segments, driving ups and downs quarter-to-quarter."

Property valuations grew slightly for the sixth consecutive month with a 0.1 percent rise this past July, according to Ten-X's All-Property Nowcast. The Ten-X All Property Nowcast measures pricing based on proprietary transactional data from the Ten-X platform, Google trends, and survey data done in conjunction with Situs/RERC. Compared to a year ago, the All-Property Nowcast is 0.3 percent higher, breaking the previous three-month streak of year-over-year pricing declines.

The Ten-X Office Nowcast shows that the office sector continued to be an outlier with a substantial 1 percent pricing increase for the second sequential month, marking an overall 4.4 percent increase from the same period last year.

"The office sector is the only sector to show prominent pricing gains in recent months," said Muoio. "Pricing gains were concentrated in the West, Southwest and Southeast; while pricing declined in the Northeast and Midwest."

While the apartment and industrial sectors saw smaller increases – up 0.1 percent and 0.2 percent respectively from the previous month – the retail and hotel sectors posted pricing declines.

Retail ended its nine straight months of pricing growth, with the Ten-X Retail Nowcast falling 0.8 percent in Q2 2018. Lack of activity in the Northeast and Southwest contributed to the overall decline with each decreasing by 1.4 percent and 1.3 percent respectively. Despite the monthly decrease, the pricing index remains up 3 percent year-over-year.

"Current events and legislation fueled some investment activity," Muoio continued. "Recent back-and-forth tariffs with China may be a concern for those looking to invest in the industrial sector, causing an increase; while the peaks and valleys within the hotel sector of investment have a strong correlation with the country's economic conditions, labor market and GDP. With this constant movement, there is currently no clear direction for CRE pricing at this time, mirroring the drift in deal volume."

An examination of cap rates and spreads showed that while 10-year U.S. Treasury rates rose to 2.91 percent on average – their highest level since mid-2011 – cap rates remained largely steady, driving compression in spreads across all sectors of the CRE market.

Since December 2015, the Federal Open Market Committee has been increasing rates, with the seventh and most recent raise taking place this past June. While rates remained constant for July, there is another projected increase coming in September. Despite the Fed hikes, interest rates are still low and have yet to materially affect cap rates, buffered by spreads.

Compared to Q2 2017, cap rates spreads are compressing with the spread between cap and interest rates across all sectors decreasing year-over-year. Industrial cap rate spreads fell 70 bps to 2.7 percent, apartment spreads decreased 40 bps to 2.4 percent, while office and hospitality are both down 50 bps to 3.1 percent and 5 percent, respectively. Retail, which has previously shown the most stability, fell 40 bps to 3.6 percent.

"The tighter cap rate spreads suggest that investors have more confidence in the commercial real estate market," said Muoio. "From apartment to office, the ongoing wholesale compression in spreads has pulled cap rate spreads in each major CRE market below their 10-year averages. While this speaks to investor confidence in CRE, it places valuations more at risk from continued interest rate increases as spreads have now compressed significantly."

Hotel spreads, which had previously been trending in line with their long-term average, have fallen alongside those of the other CRE sectors. Apartment and industrial spreads are the lowest, followed by office and retail. Hospitality spreads remain the highest, even after their recent decline. Looking at historical volatility and peaking conditions of the hospitality sector, the current spread leaves less room for improvement.

A Deeper Look at the Outlier: The Office Sector

As the retail, apartment, hospitality and industrial sectors continue to recover, the office sector continues to be the outlier in both growth and pricing. A closer look at deal volume averages over the long run show that office is the only sector not outpacing historical averages.

"We are currently in the midst of a nine-year U.S. economic expansion, the second-longest on record, resulting in CRE pricing surging to new peaks in virtually every sector and region," said Muoio. "Yet some sections have lagged behind, including the central business district and suburban office spaces."

According to Moody's/RCA CPPI, growth in the CBD office segment has decelerated since peaking in 2014 and is currently trading at an average cap rate of 5.6 percent. Simultaneously, suburban office CPPI has increased 7.9 percent year-over-year. Despite recent pricing surges, suburban office pricing has only managed to recover to 1.6 percent above its pre-recession peak, with CBD prices currently 29 percent above their previous peak.

"According to RERC, suburban office cap rates are at 6.5 percent and are slightly more affordable than their counterparts, ultimately suggesting that CRE investors interested in the office space may be targeting these types of properties due to relative value." Muoio added.

The Mid-Atlantic, Midwest, Southeast and Southwest regions all saw office deal volume in the $13-15 billion range in Q2 2018, while the Northeast and West regions saw a more extensive deal volume of $26.8 billion and $35.8 billion, respectively. However, as rapid economic and demographic expansion in major Southwest markets such as Denver and Phoenix continues, as well as the resurgence in oil and energy, new jobs in those regions will likely affect the office sector and its overall growth.

About Ten-X CommercialTen-X Commercial is the nation's leading online and only end-to-end transaction platform for commercial real estate. Since 2009, the company has sold more than $20 billion in commercial real estate. The company blends data-driven technology with industry expertise to accelerate close rates and streamline the entire transaction process. Ten-X Commercial and its parent company, Ten-X, are headquartered in Irvine and Silicon Valley, Calif., with offices in key markets nationwide. Investors in the company include Thomas H. Lee Partners, L.P., CapitalG (formerly Google Capital) and Stone Point Capital.