GAP, Penn., Nov. 13, 2018 /PRNewswire/ -- Amos Glick, a Pennsylvania Dutch craftsman, with religious convictions against photo ID, was originally denied the right to a business license in New York City. With more information in hand and a bit of pressure, the City reevaluated their position from a discrimination perspective and issued the first ever non-photo ID license. 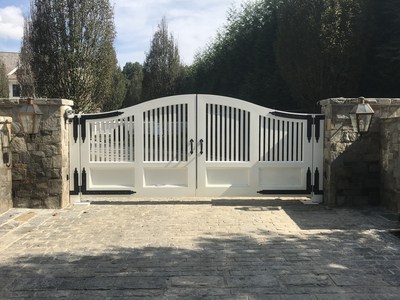 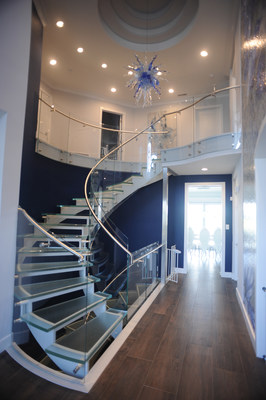 Amos Glick is the sole proprietor of Compass Ironworks, and has been participating at the prestigious Architectural Digest Home Design Show in New York City for over a decade. Originally concentrating his efforts on the affluent areas of New Jersey, Glick realized that New York City is the design mecca of the country, if not the world. Going through the daunting task of preparation, paperwork, such as proper insurance and bonds, he quickly came to understand why some contractors don't bother to go through the hassle of proper licensing. Working illegally, however, was not an option for Glick.

Compass Ironworks creates custom forged intricate railings for foyers, as well as customized aircraft grade aluminum railings for exterior terraces, and projects in salt air environments. The company also creates fences for exceptional residences — in addition to specialized driveway gates that seamlessly integrate into smart home systems, and staircases that incorporate traditional, rustic or contemporary materials. Compass primarily works from New York City to DC, and has been involved in projects in Florida and the Bahamas, and recently in California.

Recognizing the growing trend toward ironworks, Glick took the necessary steps to acquire a New York City license in early 2018. Upon researching Department of Consumer Affairs (DCA) license requirements, he found that a state-issued, photo ID was required. He procured all the license application documents, and correct insurance and bond requirements, and paid nearly $20,000 before being able to apply for a license. The New York City licensing office flagged his non-photo, Pennsylvania ID, which was then sent all the way up to the New York Law Department. Glick also shared the criteria set forth by the U.S. State Department to establish identity, with which he fully complies. He informed the office that their position falls under religious discrimination.

Glick was subsequently told that a license could not be issued without a photo ID. He spoke to a supervisor and related his experience of crossing from Mexico into the U.S. seeking treatment for his ill wife, traveling to Tijuana just a few months after 9/11. He explained to the guard, "You can see on the ID card our church prohibits Photo ID and it is signed by my Bishop." The guard replied, "I respect your religion, but this is the United Stated Federal Government and why do I want to let you in?" Glick and his wife were finally given the okay to enter the country after speaking with five separate officers.

Despite recounting this story, Glick was turned away. A few days later, the DCA attorney followed up with an emphatic "No." However, this was clearly a violation of the Civil Rights Act in spite of the fact that Glick showed conformity to U.S. State Department protocols to non-photo ID requirements.

Yet the question remained — does Glick pull away from any New York commissions or pursue litigation against New York City for religious discrimination? Does he get the ACLU involved? A decision was made to try and work out a resolution that was beneficial for everyone.

After several calls to the DCA attorney to no avail, Glick was told to converse with Emery-Chelly, a firm that specializes in discrimination lawsuits under the First Amendment. Another option was to retain a law firm to write a strongly worded letter advising the DCA of the precariousness of their position, recommending a protocol similar to the U.S. State Department.

Glick decided to have the letter drafted. Shortly after, a non-photo ID protocol outline was sent to Glick from the DCA attorney; Glick received approval to apply for the license with a non-photo ID.

As a result, New York City, a municipality that thinks highly of cultural diversity and frowns upon discrimination, has also acquired a protocol for religious groups with photo ID convictions to follow — eliminating any chance of discrimination, and allowing specialized craftsmen to do work in their jurisdiction.