WASHINGTON, March 30, 2019 /PRNewswire/ -- Officials at Hoffman-Madison Waterfront (HMW) along with esteemed Washington, D.C., elected officials today celebrated the kick-off of construction for the second half of the mile-long waterfront neighborhood. The Wharf, the $2.5 billion, 3.2-million square foot waterfront neighborhood and largest private development in the city, is establishing D.C. as a true waterfront city. 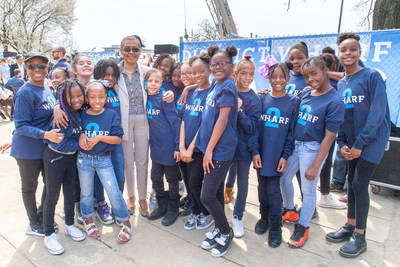 At full build out, Phase 2 of The Wharf will complete the remaining 1.25 million square feet of new mixed-use development, including office, residential, hotel, marina, and retail space, as well as parks and public places, across a half mile of redeveloped waterfront.

D.C. Mayor Muriel Bowser along with Congresswoman Eleanor Holmes Norton (D-DC) joined the co-development partners of PN Hoffman and Madison Marquette in remarks which were followed by a free community celebration with a "truck touch", street fair complete with wine and beer garden, live music, children's crafts, and a community construction parade.

"The Wharf is a tremendous example of how the District can, through innovative public-private partnerships, transform underdeveloped land into housing, jobs, and opportunity. Already, with Phase 1, The Wharf has become a world-class destination for residents and visitors alike," said DC Mayor Muriel Bowser. "In 2019, Washington, DC is truly a waterfront city, and we look forward to building on our progress and success. Together, we will continue ensuring that Washingtonians along the Potomac and Anacostia Rivers – in all the surrounding wards – are able to enjoy and benefit from the many opportunities that our city and waterfronts have to offer."

"Since we first began The Wharf—in partnership with the District of Columbia—more than a decade ago it has been about reintroducing D.C. to its waterfront through thoughtful retail, entertainment, public spaces and of course public access to D.C.'s best natural resource - its waterfront," said Monty Hoffman, Founder and CEO of PN Hoffman. "As we begin construction of the second phase of this waterfront, it is incredibly rewarding to look back at what our team has created in Phase 1 while looking forward to completing the full mile of this remarkable neighborhood."

"As we launch Phase 2 of The Wharf, we are both inspired and uplifted by the tremendous community engagement this landmark project has realized," said Amer Hammour, Chairman of Madison Marquette. "The Wharf has proven to be a transformative waterfront neighborhood with extraordinarily diverse and dynamic amenities for every demographic - and we fully expect Phase 2 to continue the excitement with added residential, office, hotel, retail and marina offerings," Hammour added.

At full build-out Phase 2 will include:

The Wharf is a model public-private partnership and is the largest planned unit development (PUD) in the history of Washington, D.C. The project's principal public partner is the District's Office of the Deputy Mayor for Planning and Economic Development (DMPED). The list of public and private stakeholders that have reviewed the project is extensive—nearly a dozen entities at the District and regional levels alone. Gaining approval of The Wharf plan required building consensus in the halls of Congress, in the Council of the District of Columbia, and in the local Advisory Neighborhood Commission (ANC-6D) and Southwest neighborhood, including more than 750 community meetings.

The Wharf looks to build on the workforce successes of Phase 1 construction—with 1,284 people were hired for new positions, and 628 of those new hires were District residents. At the completion of Phase 2, The Wharf will have generated approximately $70 million annually in taxes for the city.

Phase 2 of The Wharf is scheduled to deliver in 2022. For more information please visit www.wharfdc.com.