No existing medications can adequately treat the core symptoms, and new treatments are urgently needed. 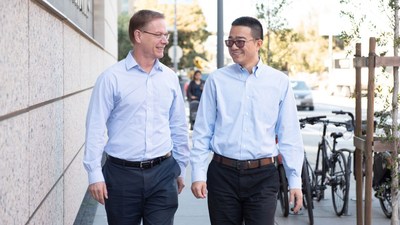 Now, researchers at the Gladstone Institutes report in Neuron that reducing levels of a protein called tau prevents the core symptoms from arising in mouse models simulating different forms of autism spectrum disorders. Tau reduction in these mice also prevented seizures, which occur in 30 percent of people with autism.

"Our findings suggest that tau reduction holds promise as a potential treatment for some forms of autism," said Lennart Mucke, MD, the founding director of the Gladstone Institute of Neurological Disease and senior author of the new paper.

Tau has never before been linked to autism, but it is known for its role in Alzheimer's disease and other neurodegenerative conditions.

"We've uncovered an unexpected new connection between degenerative diseases of aging and developmental disorders of childhood," said Mucke, who is also a professor of neurology and neuroscience at the University of California, San Francisco.

Making the Leap from Alzheimer's to Autism

These findings intrigued Chao Tai, PhD, a scientist on Mucke's team and first author of the new paper, who had previously studied Dravet syndrome at the University of Washington.

"We wondered whether tau reduction could also prevent the signs of autism that are often seen in people with Dravet syndrome," Tai said.

To explore this possibility, the team investigated a mouse model of Dravet syndrome after deleting one or both copies of the gene that encodes tau. They found that reducing tau indeed prevented the development of core autism symptoms in this model. Even 50 percent reduction of tau showed major benefits.

Because the causes of autism are so diverse, the researchers next tested the effect of tau reduction in a second mouse model of autism that results from a very different genetic mutation.

Tau reduction also prevented epilepsy, as well as two additional abnormalities seen in people with autism and related mouse models: an enlargement of the brain known as megalencephaly, and over-activation of the PI3K-Akt-mTOR signaling pathway, which regulates many important cell functions.

Finally, the researchers investigated the molecular mechanisms by which tau reduction prevents these abnormalities. They found that tau reduction enhances the activity of a powerful enzyme called PTEN, which can prevent overactivation of the autism-promoting signaling pathway.

The new findings highlight the potential of tau reduction to counteract both neurologic and psychiatric disorders. "Tau reduction appears to be the first strategy that can prevent both autism and epilepsy, two challenging conditions that all too often afflict the same people," Mucke said.

"Autism is very frequent, affecting roughly one in 60 children," Tai said. "Our findings could help address the urgent need for the development of better therapeutic strategies."

However, as the paper also demonstrates, tau reduction will probably not be effective against all forms of autism, and more research would be needed to determine exactly who might benefit.

In addition, the alterations that cause autism likely affect the brain during early stages of development and well before the diagnosis is typically made. "We are therefore eager to investigate whether tau reduction can also reverse symptoms of autism after they have emerged," Mucke said. "Ongoing studies in experimental models should help clarify optimal times for administering tau-lowering drugs to prevent or treat symptoms."

Mucke and colleagues are developing and testing small-molecule drugs that could lower tau levels or increase the activity of PTEN. Other investigational tau-lowering approaches are already being tested in people as a potential treatment for Alzheimer's disease, and this new research suggests that findings from those trials may also be informative in regard to autism.

About the Research Project

The National Institutes of Health and the Tau Consortium provided funding for this research. Other authors include Che-Wei Chang, Gui-Qiu Yu, Isabel Lopez, Xinxing Yu, Xin Wang, and Weikun Guo from the Gladstone Institutes.

About the Gladstone Institutes

To ensure our work does the greatest good, the Gladstone Institutes focus on conditions with profound medical, economic, and social impact—major unsolved diseases. Gladstone is an independent, nonprofit life science research organization that uses visionary science and technology to overcome disease. It has an academic affiliation with the University of California, San Francisco.

Jennifer Crosby Joins Gladstone as the New Vice President of...