NEW YORK, Feb. 5, 2018 /PRNewswire/ -- In a historic forensic reconstruction project, Travel Channel is revealing the face of King Tut's mother for the first time. The groundbreaking endeavor will be featured in a two-part special of the network's hit series "Expedition Unknown" with Josh Gates, airing on Wednesday, February 7 and February 14 at 9 p.m. ET/PT. The extraordinary sculpture provides an accurate depiction of her appearance in life and bolsters the theory that the 3,400-year-old mummy of King Tut's biological mother, nicknamed the "Younger Lady," is also Queen Nefertiti. 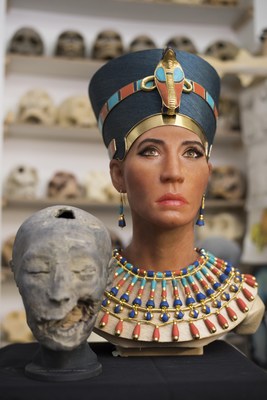 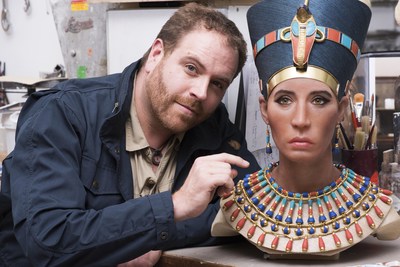 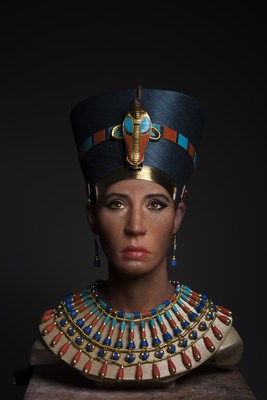 During the special episodes, Gates investigates three of the most powerful and elusive women in ancient Egypt – Hatshepsut, Cleopatra and Nefertiti. An hour-long special, "Expedition Unknown: After the Hunt," will premiere at 10 p.m. ET/PT, immediately following each episode. The after-specials will revisit Gates' journey as he and his team dig deeper into their astounding findings, further analyze key evidence and reveal never-before-seen footage from the expedition.

Gates and the "Expedition Unknown" team, along with noted Egyptologist Dr. Aidan Dodson of Bristol University, received permission from Egypt's Ministry of Antiquities and The Egyptian Museum to remove the protective glass case covering the mummy to examine her further. Using the latest 3D imaging technology, the mummy's face was digitally mapped to create a replica of her head. With this model and forensic analysis, paleoartist Elisabeth Daynès, known for her recreation of King Tut in 2005, sculpted a lifelike bust of the Younger Lady's face. The striking result was then analyzed against well-known images of Queen Nefertiti.

"This remarkable face seems to be consistent with ancient representations of Nefertiti," said Dodson. "It's extraordinary. When taken alongside the latest reading of the genetic data, this provides us with truly exciting evidence that the mummy of the Younger Lady is none other than Queen Nefertiti herself."

"Nefertiti is remembered as one of the most beautiful women in history, but her accomplishments are anything but skin deep," said Gates. "She was a powerful pharaoh and ruled during one of the most prosperous times in the ancient world. But like many of history's most important female figures, her legacy has been obscured."

Gates added, "This is a unique and exciting moment that allows us to look into the past and help restore the dignity of an incredibly significant woman. The bone structure and the features are remarkably consistent with ancient depictions. I believe this is the true face of Nefertiti."

The badly damaged mummy of the Younger Lady was uncovered in a tomb in Egypt's Valley of the Kings in 1898, and shown through DNA evidence in 2010, to be King Tut's biological mother. Tut's father was the pharaoh Akhenaten, who was married to Nefertiti. It has therefore been theorized that this mummy could be the remains of the legendary queen, whose body has never been positively identified.

"This project is very special and very complex," said artist Elisabeth Daynès. "I worked closely with forensic paleopathologists and anthropologists to determine accurate muscle, skin and soft tissue depth. Everything was meticulously calculated by hand.

"In all, it took more than 500 hours to create the bust. Even the jewelry on the bust was handcrafted by designers who work for Dior," adds Daynès. "When you overlay the profile of the reconstruction with the famous Berlin Bust of Nefertiti, they are an incredibly close match."

"Expedition Unknown," one of Travel Channel's most popular series, follows host Josh Gates around the world as he searches for answers to some of the world's greatest legends and stories. Visit TravelChannel.com for more on "Expedition Unknown." Follow @TravelChannel and #ExpeditionUnknown for exclusive content and updates. Follow host Josh Gates on Twitter: @joshuagates and on Instagram:@gatesygram.

*Photo use to be credited as follows: Sculpture by Elisabeth Daynès in partnership with Travel Channel's "Expedition Unknown" and Josh Gates. Photo courtesy of Travel Channel.

ABOUT TRAVEL CHANNELFor virtual and active travelers who want to go on a thrilling quest; taste other cultures; enjoy the mystery of the unexplored; get a dose of epic adventure or a splash of wacky fun; there is no better daily escape than Travel Channel. Reaching more than 83 million U.S. cable homes, Travel Channel is the world's leading travel media brand. Fans also can visit for more information or interact with other fans through Facebook, Twitter, Pinterest and Instagram. Headquartered in Knoxville, Tennessee, Travel Channel is owned by Scripps Networks Interactive, Inc., which also owns and operates HGTV, DIY Network, Food Network, Cooking Channel and Great American Country.