FOSHAN, China, Aug. 3, 2021 /PRNewswire/ -- The latest FORTUNE Global 500 list was released on August 2nd, with the number of Chinese companies in the list increased to 143, demonstrating the strong vitality of China's economy. Among them, China's leading real estate developer Country Garden Holdings ("Country Garden") (02007.HK) continued to witness a rise in its ranking, to 139th place. 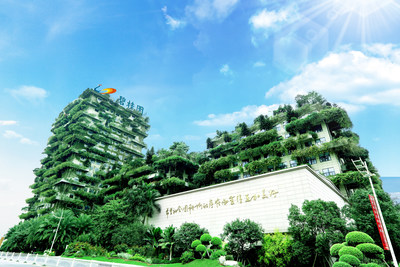 Since its debut on the FORTUNE Global 500 list in 2017, Country Garden has climbed in the rankings for five consecutive years, becoming the list's fastest-rising company in 2019 and the highest-ranked real estate firm in 2020. In 2021, Country Garden's ranking has reached a new high, providing distinctive proof of the rise of China's privately-held firms on the world stage alongside Tencent and Huawei.

Country Garden's continuous and steady growth has, over the years, become an emblematic feature of the company.

The leverage ratio is one of the lowest in the industry. The rapid expansion of the Country Garden's operations in combination with judicious debt control is the secret to the company's continuous and steady growth.

"Country Garden is pursuing high-quality, stable and healthy development," said Mr.Mo Bin, CEO of Country Garden Holdings. Against the backdrop of gradually tightening control policies in China's real estate sector, Mo made a point of saying that China's real estate market will become increasingly healthy as the general effort to rein in speculation remains unchanged. As China's urbanization drive continues to advance, the external environment is most favorable for Country Garden.

Three years ago, Country Garden adopted a corporate philosophy which, when summarized into a Chinese saying means "Walking steadily and going far", to coordinate all aspects of corporate planning. "Safety and quality are the priority, while the progress of all projects is planned scientifically," Mo emphasized. "Each regional director remains focused on the region in which their projects are located and the projects themselves, so as to truly achieve the goal of Reputation-First and Long-Termism."

The implementation of a series of corporate governance and reform measures around the "Walking steadily and going far" philosophy has led to the optimization of Country Garden's management performance and the formation of a strong competitive advantage across China's third- and fourth-tier markets. Diversified land acquisition channels and a high percentage of independently-formed sales teams have ensured the Company's future profitability and sustainable business performance.

Country Garden has been positively reviewed by credit rating agencies for its sound operating performance and prudent financial management. In 2020, Moody's raised Country Garden's ratings as an issuer and on its senior unsecured bonds to investment-grade Baa3 while S&P Global Ratings upgraded the outlook of the Company's long-term issuer credit rating from "stable" to "positive", despite the increased market uncertainty in 2020 due to the COVID-19 pandemic.