JOHOR BAHRU, Malaysia, Oct. 23, 2019 /PRNewswire/ -- Forest City, the high-profile smart new city in Malaysia built by leading Chinese real estate developer Country Garden (HK:2007) in partnership with an affiliate of the Johor State Government was cited as one of the world's model cases for ecologically sustainable cities for its innovative approach to building a city based on the concept of three-dimensional stratification in terms of the layout of transportation routes and vertical greenery in the Forbes article "5 New Cities That Are Set To Shake Up The Future". 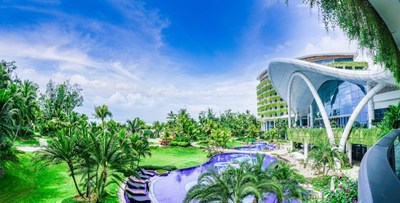 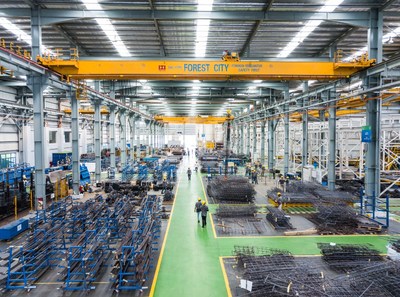 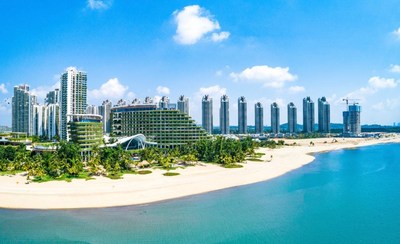 The article explains how Forest City differentiates itself from other cities worldwide with a transportation network and a parks system that makes use of all three dimensions in its planning and layout, adding a vertical layer – something that is rarely considered in most typical urban environments.

Forest City executive general manager Wu Huixi indicated that according to the architectural planning and design of the project, an eco-friendly system consisting of vertical greenery, sky gardens and rooftop gardens will be installed across the city with the mission of creating a landscape, which could be described as a vertical forest, where nature and buildings co-exist harmoniously. The three-dimensional and vertical greening design embodies the city's concept of creating a complete environment-friendly ecosystem by leveraging the natural wind, lighting and water resources in a move to reduce energy consumption, assure residents of clean air, collect rainwater in a move to conserve water resources and reduce noise.

In addition, residents living in any district of the city will be just steps away from one or more of the routes of the three-dimensional transportation system. Mr. Wu explained, "The rapid growth of local passenger car ownership increases the complexity of the road network. As a result, our Forest City will be divided into three tiers - the residential area established on the ground tier with the transportation network and parking lots built on the middle and lowest tiers, with the aim of creating a safe environment for pedestrians. The three-dimensional design of the city will facilitate the development of natural ecosystems and increase the land utilization rate."

Country Garden, the company behind the planning of Forest City, also focused on environmental protection during the entire construction process of the project. Forest City invested 2.5 million ringgit (approx. US$600,000) to establish protection zones for sea grass in partnership with local universities with the aim of improving the habitats in which dugongs, sea turtles and sea horses, among other endangered species, live. The city also plans to build eight wastewater treatment plants, which will use advanced biotechnologies to convert wastewater into recycled water available for reuse in order to address Forest City's irrigation water needs and help relieve any stress on Johor Bahru's water system.

Industry experts believe that the sustainability of Forest City depends on its capabilities in building business clusters and recruiting talent from around the world. Economist Zhao Guangbin said during his visit to Forest City, "In addition to building liveable communities, Forest City will need to create a business-friendly environment to ensure its sustainable development. However, the city will need to address some additional challenges once it tries to persuade more companies to build facilities here rather than to simply build towers."

The city's Industrialised Building System (IBS) Plant, which entered the Malaysia Book of Records as the largest fully automated prefabrication facility in Malaysia, went operational in August 2017. Phase 1 of the facility is designed to produce 260,000 cubic metres of concrete annually. Forest City expects to create 220,000 jobs during its entire construction period of 20 years. While continuing to invest funds into the construction, the project is well on track to generate a cash flow for itself as each facility goes into commercial operation and, by doing so, continue to acquire high-skilled talent.

Forest City is considered by building and construction professionals as an advocator of the Garden City Movement, an urban planning concept initiated early in the 20th century. Benjamin Warner, who has rich experience in implementing architectural educational programs and practices in the UK and Japan, commented, "Our dream for a garden city comes true with Forest City, which has moved beyond the mechanical urban planning concept."

When commenting Forest City's geographical location during his visit to the project, Singapore Digital Chamber of Commerce honorary advisor Victor Tay said, "Forest City is strategically positioned between Singapore's and Johor's transit hubs." He indicated that Forest City and Singapore, which now houses the regional headquarters of 70% of the world's Fortune 500 companies, are, at this time, connected by just a single bridge.

Mr. Zhao added, "Singapore and Johor Bahru, separated by a river, are uniquely positioned to accelerate their convergence, similar to the role that the Guangdong-Hong Kong-Macao Greater Bay Area plays in boosting the integration of Hong Kong, Macau and Guangdong. Looking ahead, Johor Bahru with its beautiful landscapes and low cost of living and Forest City are expected to embrace huge development opportunities."

Forbes commented in the article, Given the strategic geographical position, Forest City takes the lead in identifying the liveable and environment-friendly conditions as one of the key objectives and concepts in terms of planning and design. The initiatives with a focus on design, environment and industry have been implemented in the city. Forest City is leading cities worldwide in rethinking the solution for responding to the ecological crisis and development risk from a new planning perspective.