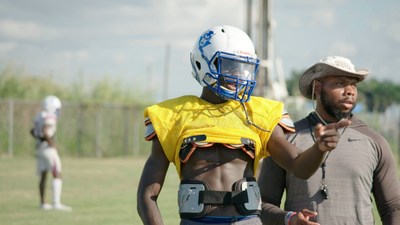 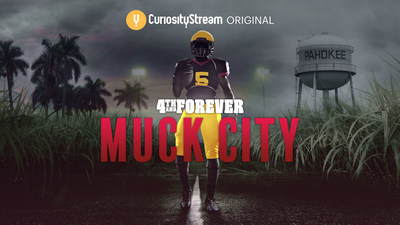 Tucked in between Lake Okeechobee and Florida's vast Everglades, the towns of Pahokee and Belle Glade are affectionately known as "Muck City" because of the dark, rich soil that fuels one of the largest sugarcane crops on the planet. Less than an hour's drive from the mansions of West Palm Beach, Muck City is home to one of the greatest rivalries in football – the battle between neighboring Pahokee and Glades Central High Schools. These two powerhouses produce more professional football players per capita than anywhere else, including such stars as Anquan Boldin and Santonio Holmes, who both appear in the series, as well as Andre Waters, Rickey Jackson, Fred Taylor, Jimmy Spencer and Jessie Hester. With this distinction comes a deep, community-wide obsession with winning.

But this series is about much more than success on the gridiron. It's an inspiring portrait of a unique American community coming together to help its youth succeed in the face of incredibly daunting challenges. It's about helping everyone in the Muck achieve a better life.

"The drama portrayed in 4th and Forever: Muck City is compelling and raw, and you will fall in love and root for these special young men, their coaches, families, and the community," said Clint Stinchcomb, President and CEO, CuriosityStream. "4th and Forever: Muck City is the story of their dreams, hopes, and challenges and it highlights universal themes of opportunity and class, and even trust and betrayal. It's great premium content to introduce viewers to CuriosityStream."

Filmed at both schools throughout the summer and fall of 2019, 4th and Forever: Muck City documents the emotional roller coaster behind this ongoing rivalry – from the hopeful days of training camp and the hard work of the regular season, to the high stakes of their head-to-head battle in the annual "Muck Bowl" -- one of the most intense match-ups in high school sports.

More than a dozen other players, coaches, and their families are featured in 4th and Forever: Muck City, including Pahokee quarterback Mack Williams and defensive lineman Delonus "Scooter" Kabir; and Glades Central standouts Ja'vontae "Tank" Williams and Jim Davis. Football is the ever-present backdrop as we follow these teammates, friends, and rivals in Muck City, where they encounter life's challenges and battle to achieve personal goals.

With offices in New York and Knoxville, Jupiter Entertainment has built an unrivaled track record of producing successful, highly formatted series and delivering outstanding ratings and strong renewals.  Since its launch over two decades ago, the company has produced 75 series and specials for 30 networks.  Jupiter is currently in production across multiple projects totaling over 250 hours of programming for nearly a dozen networks and platforms, including hit true crime franchises like Snapped (Oxygen), In Pursuit with John Walsh (ID), Southern Gothic (ID), Homicide Hunter (ID) and Killer Couples (Oxygen) as well as the ambitious feature length documentary First to the Pole (Discovery).  Among its many credits also include the record-breaking hit American Murder Mystery (ID), Homicide Hunter (ID) and explosive docusoaps such as Welcome to Myrtle Manor (TLC) and Wild West Alaska (Animal Planet). The company has also produced prime-time series and specials for A&E, Discovery, History, Investigation Discovery, Oxygen, Reelz, TLC, TruTV, TV One, Fuse, and Animal Planet among more. In the last year alone, Jupiter produced 19 series, specials and pilots for 10 networks.