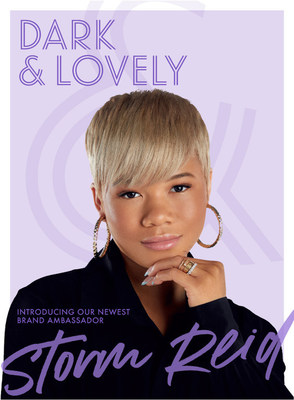 "Partnering with an iconic brand like Dark & Lovely is a full circle moment! The brand has been in my family since I was a little girl, and my mom even appeared in Dark & Lovely ads when I was growing up," said Reid. "There are so many exciting products on shelves for Black women today, yet it's Dark & Lovely that stands out for me as a brand that has been a continuous leader of the culture."

Reid has emerged as one of Hollywood's most sought-after young actresses as well as a producer through her own banner, A Seed & Wings. She has appeared in memorable movie roles for The Suicide Squad (2021), The Invisible Man (2020), Don't Let Go (2019), Netflix's limited series, When They See Us (2019), and is currently one of the stars in HBO's hit show Euphoria (2019-Present), with many other projects forthcoming.

"Storm Reid perfectly embodies all that Dark & Lovely stands for – confidence, pride, self-expression and overall Black excellence," said Erica Culpepper, General Manager, SoftSheen-Carson. "With her dynamic personality and signature style, Reid is the ideal person to represent the Dark & Lovely brand. She is Dark & Lovely & so much more!"

In addition to serving as ambassador for Dark & Lovely's #1 haircolor, Fade Resist and the all-new Blowout haircare line, Reid will also use her platform to help support Dark & Lovely's philanthropic initiatives with causes that impact and uplift the black community.

For nearly 50 years, Dark & Lovely has addressed the specific beauty needs of  Black Women with haircare products tailor made just for you. As a subsidiary of L'Oréal USA, Dark & Lovely continues to unveil breakthrough hair innovations for women of color. For more information, visit www.darkandlovely.com.

With numerous credits to her name, Storm Reid has emerged as one of Hollywood's most sought-after young actors. She is best known for starring as 'Meg' in A WRINKLE IN TIME, directed by multi-award winner Ava DuVernay. She has also appeared in memorable roles for THE SUICIDE SQUAD, INVISIBLE MAN, DON'T LET GO, and TWELVE YEARS A SLAVE. On the small screen, Reid stars alongside Zendaya in HBO's EUPHORIA, and can also be seen in Ava DuVernay's Netflix series WHEN THEY SEE US, based on the Central Park Five. Earlier this year, Reid partnered with Facebook Watch on "Chop it Up," a conversation series by way of cooking. The series was created and produced by Reid and her mother, Robyn Simpson, through their production company "A Seed & Wings." The independent multimedia production house, which was founded in 2013, is rooted in narratives that forge multi-cultural conversations, entertain, educate, and uplift.

New Dark & Lovely Blowout Collection Brings You A Next Level...