CHICAGO, April 25, 2018 /PRNewswire/ -- DECADES Network, the multicast TV network from Weigel Broadcasting Co. and CBS Television Stations, proudly presents the television premiere of "Wait For Your Laugh" the untold story of fame, love, tragedy and 90 years of American show business through the eyes of the woman who did it all— Rose Marie. "Wait For Your Laugh" will have its television premiere on Tuesday, May 1 at 9:00 PM ET on DECADES, alongside episodes of Marie's performance in "The Doris Day Show" and a guest role on "Gunsmoke". 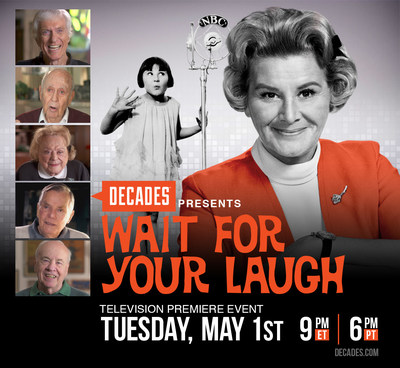 Entertainer Rose Marie, famous as Sally Rogers on "The Dick Van Dyke Show" and as the top center square on "Hollywood Squares," had a varied and compelling showbiz career that spanned 90 years and took her everywhere from humble stages to Vaudeville to Broadway and from the early days of radio to the silver screen to the living-room television set. "Wait For Your Laugh" chronicles Rose Marie's one-of-a-kind; nine-decade showbiz journey with commentary and contributions from Carl Reiner, Dick Van Dyke, Tim Conway, Peter Marshall and others. The DECADES television premiere of the film, by Jason Wise, Christina Wise and Jackson Myers in association with Forgotten Man Films, also features behind-the-scenes color footage from Rose Marie's personal collection, capturing the backstage antics on "The Dick Van Dyke Show" and rare footage from her other sets.

"I cannot think of a better first place on television to show my film 'Wait for Your Laugh'. Rose Marie adored this channel, as do so many others who perfectly align with the subject and message of this film," said Jason Wise, director of "Wait for Your Laugh."

"The brilliance and talent of Rose Marie spanned nine decades and her story is really the story of modern show business in America, from Vaudeville to radio to film and television," said Neal Sabin, vice chairman of Weigel Broadcasting Co. "Being able to premiere this amazing film for television audiences here on the DECADES Network is a pleasure. It fits in so well with our mission to relive, remember and relate to the entertainers and pop culture touch points from across the decades."

"I'm so very thrilled that "Wait For Your Laugh" will be premiering on TV for my mother's fans who were unable to see it in the theaters," said Georgiana Guy-Rodrigues, Rose Marie's daughter. "So many of her fans are television fans, and now they will be able to see just how extraordinary and vast her 90 year career was. There was no one like her."

"Wait For Your Laugh" tells the story of Rose Marie's long and active career in entertainment and is the greatest untold story in show business. Rose Marie worked in every facet of entertainment. She was "the darling of the airwaves" at the age of four and went on to work in vaudeville, radio, Las Vegas, Broadway, movies, television, theatre, concert halls and nightclubs. Along the way she was known as "the kid" by the mob. She called Al Capone "Uncle Al", opened the Flamingo Hotel in Las Vegas for Bugsy Siegel, and had her career protected and nurtured by "the boys." Her friends include the best show business has to offer: Frank Sinatra, Dean Martin, Johnny Mercer, Jerry Lewis, Johnny Carson, Jimmy Durante, Milton Berle, Doris Day, Rosemary Clooney, Margaret Whiting and Bing Crosby. Unbeknownst to fans, the woman always looking for a man was actually married for almost 20 years to the love of her life, Bobby Guy, one of the best trumpeters in the business. Active until her death on December 28, 2017, at the age of 94, "Wait For Your Laugh" is the story of American show business and the one woman who literally did it all— Rose Marie.

To find out where you can watch DECADES in your area, click "Where to Watch" on www.decades.com.

Weigel Broadcasting Co. is a Chicago-based business, family owned since 1965. Weigel and its affiliated companies own and operate network and independent television stations in Chicago, Milwaukee, and South Bend, Indiana. In addition, Weigel is the leader in the multicast television network space with "MeTV," Memorable Entertainment Television, being the number one rated and distributed network in the space, as well as the "Movies!" Network in cooperation with the Fox Television Stations, "H&I" Heroes & Icons, and "DECADES" Network in partnership with the CBS Television Station Group.