STAMFORD, Conn., May 17, 2019 /PRNewswire/ -- Design Within Reach today announces the opening of Dome Life, a pop-up shop of furniture and clothing with LA-based fashion brand Entireworld that runs May 17–27, at the DWR SoHo Studio and coinciding with NYCxDesign. The company will also kick-off its new event series +Design – which explores the connections between design and the world around us. This first discussion will feature Entireworld founder and Creative Director Scott Sternberg and focus on the role of myth and design, with Deborah Needleman, former editor in chief of T Magazine. 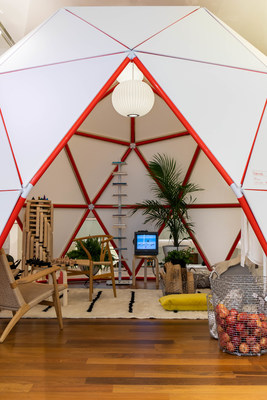 "If you're familiar with Sternberg's work, then you know he is a master at tugging on heartstrings and inspiring moments of hope and wonder," says Kim Phillips, Head of Public Relations and Events at Design Within Reach. "Collaborating with him and the Entireworld team on this project has been truly energizing and inspirational, and this spirit is instilled in the Dome Life experience."

Radiating Sternberg's optimism and utopian vision, each geodesic dome showcases Entireworld's Spring/Summer 2019 collection in dialogue with modern furniture and accessories from Design Within Reach. Understated and relaxed basics from Entireworld sit among curated pieces from DWR's emerging designers and 20th century greats alike, all available for purchase at DWR SoHo. Customers can shop T-shirts, sweats, undies, jackets, socks, button-ups and dresses for summer, as well as a curated selection of furniture, lighting and ephemera.

"I couldn't think of a better partner for Entireworld than Design Within Reach," says Scott Sternberg, Founder and Creative Director of Entireworld. "We share the same love, enthusiasm and reverence for great modernist design. What a dream to work with such incredible products from my design heroes – Charles and Ray Eames, Jens Risom, Hans Wegner, Alvar Aalto, George Nelson and more – to build this pop-up experience for NYCxDesign."

As expected from the pair of like-minded brands, each a leader in their respective industry, Dome Life takes the pop-up store concept to the next level. The domes, store windows, and social media channels feature original videos that bring the installation and the concept behind it to life, with models wearing Entireworld interacting with the furniture and objects. Design week-goers and customers alike are sure to walk away from Dome Life feeling inspired.

Dome Life speaks to yesterday's tomorrow, the spirit of optimism, and the myth of utopia.

About Design Within Reach, Inc.Design Within Reach, Inc., founded in 1998 and headquartered in Stamford, Connecticut, is the world leader in authentic modern design. The company sells its furniture and accessories to residential and commercial customers through retail Studios in North America, via the Web at dwr.com, by phone at 1.800.944.2233 and through the DWR Contract division at dwrcontract.com.

About EntireworldEntireworld is the stuff you live in…cozy, comfy, high-quality, re-imagined basics for men and women. The company is the brainchild of Scott Sternberg, CFDA award-winning designer and photographer who founded the original Band of Outsiders in 2004. Entireworld launched online in April 2018.

About Scott SternbergScott Sternberg is the Founder, CEO, and Creative Director of Entireworld. Prior to that, Sternberg was the CEO and Creative Director of Band of Outsiders, which he founded in 2004. After launching, the brand quickly achieved industrywide recognition for its idiosyncratic take on preppy clothing and its unconventional approach to brand promotion. His off-beat menswear collection led to a womenswear collection in 2007, with both eventually attracting more than 250 global retailers. Sternberg won CFDA's Swarovski Award for New Menswear Designer of the Year in 2009, and in 2010 was jointly awarded the CFDA Best Menswear Designer Award. In 2015, Sternberg announced he was leaving the brand. Over the course of 10 years, Sternberg photographed all of the Band of Outsiders Polaroid campaigns, featuring a range of artists including Frank Ocean, Donald Glover, Kirsten Dunst, Michelle Williams, Josh Brolin, Amy Adams, Ed Ruscha, Jason Schwartzman, and Sarah Silverman.

Sternberg lives in Los Angeles, with his dog, General Zod.