NEW YORK, June 15, 2020 /PRNewswire/ -- Only one in three Americans feel they have heard all that is required from their government and employers (32% and 33% respectively) in order to feel safe returning to work, according to the June edition of an international opinion survey tracker conducted by leading global strategic communications firm Kekst CNC. 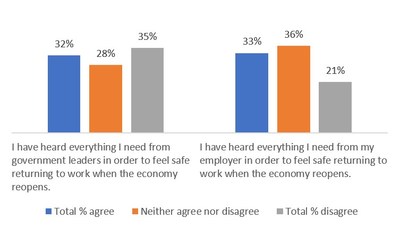 The dynamics are similar among American workers specifically: 31% and 23% respectively feel they have not yet heard enough. What's more, this sentiment is especially true among lower-earning Americans, of whom only 18% agree their employers have made them feel safe enough to return.

American office workers identified a range of specific barriers, including the continued fear of contracting the disease (54%) and skepticism regarding the possibility of socially distancing while at work (47%). Approximately one third identified the continued desire to work remotely as a main barrier to return.

Americans have also grown more pessimistic about the expected duration of the crisis, with 59% now predicting the impact to the economy to last one year or longer, compared to 36% in April.

Across several critical sectors of the economy, pluralities now say they do not expect to feel comfortable spending at similar or higher levels until at least 2021 on: airlines and travel (61%), luxury goods (57%), tech gadgets/equipment (44%), restaurants and entertainment (41%), and clothing/apparel (35%).

The research, carried out among a representative sample of 6,000 adults, including 1,000 in the U.S. between June 1st and 5th, alongside similar numbers in the U.K., France, Germany, Sweden, and Japan, also found that staff and leadership diversity is one of the top three most important social changes to Americans post-crisis—behind health and safety measures and mental health.

Commenting on the findings, Nicholle Manners, Global Head of Knowledge, Insights, Research & Analytics (KIRA) at Kekst CNC said: "This research makes clear that Americans would benefit from further reassurance from government and business leaders that their health and safety will remain a top priority as states continue to reopen. It also sheds light on specific environmental, social, and governance measures both consumers and employees will expect to see post-crisis. A simple return to 'business-as-usual' may no longer suffice."

The U.S. in International context (as of the time the latest survey was conducted)