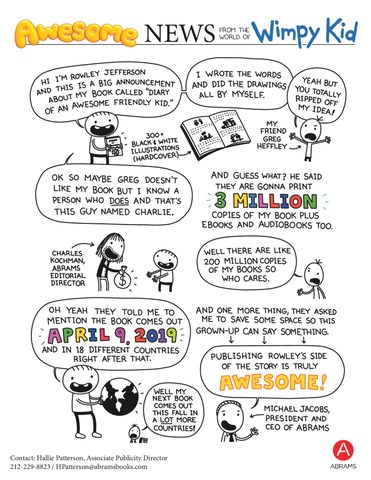 Greg Heffley has been chronicling his middle-school years in thirteen Diary of a Wimpy Kid journals. Now, in Diary of an Awesome Friendly Kid, Greg's best friend, the undauntedly cheerful Rowley Jefferson, agrees to take on the role of biographer, recording his pal's life story. But it turns out Rowley is a poor choice for the job, and his "biography" of Greg says more about himself than it does about his best friend. With over 350 black-and-white illustrations, Diary of an Awesome Friendly Kid offers readers a chance to see the Diary of a Wimpy Kid world in a whole new way. The book will be supported by an extensive multifaceted publicity and marketing campaign.

Michael Jacobs, president and CEO of ABRAMS, says, "Publishing Rowley Jefferson's side of the story is truly AWESOME! Jeff Kinney's power to excite, engage, and expand his fans' worlds is evident in the amazing sales of the Diary of a Wimpy Kid series, which has made reading fun for millions of kids around the globe. Now, that experience will be doubled with the introduction of Rowley Jefferson's own voice. I can already hear the kids, parents, educators, and booksellers shouting with joy and delight. We, at Abrams, are thrilled to be bringing this book to market!"

Diary of a Wimpy Kid books are published in 70 editions in 59 languages. More than 200 million copies of the books in the series have been sold globally. Published in 2007, the first book was an instant bestseller and has remained on the New York Times bestseller list since its publication and through the release of the thirteenth book for more than 655 weeks total. The series is also a fixture on the USA Today, Wall Street Journal, Publishers Weekly, and IndieBound bestseller lists.

About the AuthorJeff Kinney is a #1 New York Times bestselling author and a six-time Nickelodeon Kids' Choice Award winner for Favorite Book for his Diary of a Wimpy Kid series. Jeff has been named one of Time magazine's 100 Most Influential People in the World. He is also the creator of Poptropica, which was named one of Time's 50 Best Websites. He spent his childhood in the Washington, D.C., area and moved to New England in 1995. Jeff lives with his wife and two sons in Plainville, Massachusetts, where they own a bookstore, An Unlikely Story. For more Wimpy Kid, visit wimpykid.com.