ENGLEWOOD CLIFFS, N.J., May 10, 2021 /PRNewswire/ -- LG Electronics USA announces the launch of Only on OLED, a campaign that will bring exclusive events and moments in gaming, sports and movies best enjoyed on LG's critically-acclaimed LG OLED TVs. Only on OLED will feature unparalleled access to a live celebrity gaming face-off series, docu-style short films featuring professional star athletes and exclusive sneak peeks at never-before-seen content from some of this year's most anticipated movie releases available only on LG TV's FOMO Channel app on its webOS smart TV platform. 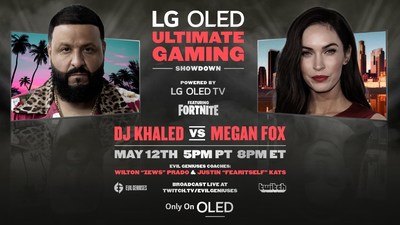 "LG OLED TVs deliver an unparalleled entertainment experience into your home. The Only on OLED program embraces the entertainment passion points of our consumers taking them beyond the actual movie, sporting event or gaming play with never-before-seen events and behind-the scenes content best experienced on OLED TVs," said Peggy Ang, LG's Senior Vice President of Marketing.

The Only on OLED campaign kicks off in style on May 12 with the first of a series of Celebrity Gaming Showdowns featuring multi-platinum-selling music mogul DJ Khaled and world-renowned actor Megan Fox. The two will go head-to-head in a 90-minute Fortnite battle, live streamed on professional esports team Evil Geniuses' Twitch Channel. Throughout the match-up DJ Khaled will be coached by Evil Geniuses talent Justin "FearItSelf" Kats and Megan Fox will be supported by legendary Evil Geniuses Counter-Strike coach Wilton "Zews" Prado.

Following the gaming competition, LG TV owners will have exclusive access to behind-the-scenes moments, additional content from the Ultimate Gaming Showdown plus the ability to watch it whenever they'd like on LG's exclusive FOMO Channel app. Future Celebrity Gaming Showdown participants and battles will be announced throughout the year.

"Only on OLED is the only place you'll find a gaming event like this. It brings together the moments people love - gaming, sports, movies - all in one place," said DJ Khaled. "You have to experience LG OLED- I couldn't imagine a better TV than the OLED to play this video game against Megan Fox on."

"I've spent a lot of hours gaming over the years but playing on LG OLED is like an entirely new experience," said Megan Fox." "When I was asked to join the Only on OLED gaming showdown against DJ Khaled there was no way I was going to pass up the opportunity. Playing on LG OLED makes you feel like an esports pro…even though you're clearly not."

Beyond gaming entertainment, Only on OLED will also deliver exclusive sports and movie experiences featuring star athletes and some of the most anticipated movie releases of 2021. Launching this spring, Only on OLED will debut two bespoke short films featuring professional football and basketball superstars taking fans behind-the-scenes for a glimpse into the story behind the player. Giving LG owners exclusive access to the most sought-after new content from some of the world's biggest movies, LG USA is excited to offer behind-the-scenes looks from a few of this year's highly anticipated Warner Bros. Pictures film releases, available exclusively on LG OLED TVs. More details on these programs will be announced at a later date.

LG was the first to introduce transformative OLED technology to large screen TVs, and today, more than one million LG OLED TVs have been sold in the United States. Experts worldwide have hailed LG OLED as the best TV technology ever, thanks to its unique ability to create its own light. Only OLED features over 8.2 million self-lit pixels that can be individually controlled, resulting in the deepest black levels, greater detail in darker areas, and rich colors for the most realistic picture quality. For gaming and dynamic sports and movie content, the responsiveness and smoothness of the LG OLED viewing experience is unmatched.

For more information on LG OLED TVs, visit LG.com. Having FOMO about all of the exciting experiences coming from Only on OLED? Visit an LG-authorized retailer to upgrade your home entertainment experience. LA Lakers' Kyle Kuzma And LG Team Up To Create Hanging With Kuz...