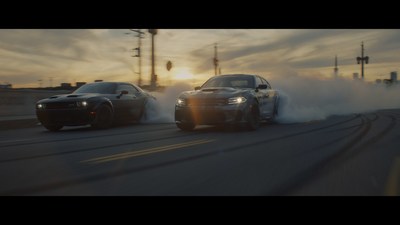 Dodge is launching its new "House of Power" marketing campaign, featuring the Dodge Challenger SRT Hellcat Widebody, the Dodge Charger SRT Hellcat Widebody and the Dodge Durango SRT, in addition to footage from the upcoming action thriller "F9," the ninth chapter in Universal Pictures' blockbuster Fast Saga, which has earned more than $5 billion worldwide. The campaign will include a 30-second version of the video for television, which will debut this week, in addition to the 60-second version that extends to the brand's digital and social media channels, including YouTube, Facebook, Instagram and Twitter.

"'House of Power' is the next chapter in the brand's long-standing partnership with Vin Diesel and the iconic 'Fast' franchise," said Tim Kuniskis, Global Head of Alfa Romeo and Head of Passenger Cars – Dodge, SRT, Chrysler and FIAT, FCA – North America. "'House of Power' isn't a place, it's a state of mind that Dodge enthusiasts have always shared. It's for those who don't fit the mold, but break it ... this state of mind is a brotherhood. A Brotherhood of Muscle."

To launch the new chapter in its iconic Fast saga, Universal Pictures held a massive fan celebration, "The Road to F9," on January 31 in Miami, Florida. The studio released the all-new trailer for the film and hosted a once-in-a-lifetime concert complete with performances from global music superstars, including Cardi B and Ozuna, who both have roles in "F9." The 60-second "House of Power" spot first aired on television during the televised event.

Narrated by Vin Diesel, "House of Power" is set against the pulse-pounding "Hell's Bells" track by AC/DC.

"F9"No matter how fast you are, no one outruns their past.

Summer 2020 is the time for "F9," the ninth chapter in the saga that has endured for almost two decades and has earned more than $5 billion around the world.

Vin Diesel's Dom Toretto is leading a quiet life off the grid with Letty and his son, little Brian, but they know that danger always lurks just over their peaceful horizon. This time that threat will force Dom to confront the sins of his past if he's going to save those he loves most. His crew joins together to stop a world-shattering plot led by the most skilled assassin and high-performance driver they've ever encountered: a man who also happens to be Dom's forsaken brother, Jakob (John Cena, next year's "The Suicide Squad").

"F9" sees the return of Justin Lin as director, who helmed the third, fourth, fifth and sixth chapters of the series when it transformed into a global blockbuster. The action hurtles around the globe, from London to Tokyo, from Central America to Edinburgh, and from a secret bunker in Azerbaijan to the teeming streets of Tblisi. Along the way, old friends will be resurrected, old foes will return, history will be rewritten and the true meaning of family will be tested like never before.

Dodge//SRTFor more than 100 years, the Dodge brand has carried on the spirit of brothers John and Horace Dodge. Their influence continues today as Dodge proudly offers a complete lineup of performance vehicles that stand out in their own segments. For 2020, Dodge literally expands its high-performance Charger model lineup, adding a Widebody exterior to America's only four-door muscle car. The 2020 Dodge Charger SRT Hellcat maintains its reign as the most powerful and fastest mass-produced sedan in the world.