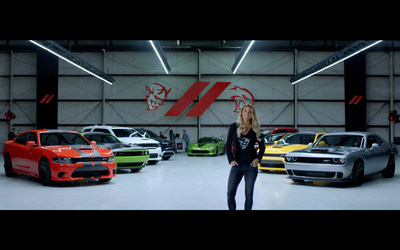 In support of The Fate of the Furious, Dodge is launching a multitier marketing campaign, including television ads, social media and digital extensions, and licensed products. The co-branded campaign promotes the blockbuster Fast & Furious franchise and Dodge//SRT, the mainstream and ultimate performance brands of FCA US. Dodge and SRT Chargers and Challengers, the world's fastest and most powerful muscle cars, are prominently featured in the upcoming movie.

"Fast Dodge cars, adrenaline-filled action and family have fueled the Fast & Furious franchise from the beginning," said Tim Kuniskis, Head of Passenger Car Brands – Dodge, SRT, Chrysler and FIAT, FCA-North America. "For more than 15 years, the Fast & Furious series has showcased some of the world's most iconic and significant performance vehicles, and The Fate of the Furious will continue this tradition."

"The Fast & Furious franchise provides a natural extension for showcasing Dodge's most powerful performance vehicles to movie and car enthusiasts everywhere," said Olivier Francois, Chief Marketing Officer, FCA - Global. "The best co-branded promotional spots are those in which the world of the Fast & Furious films and our world merge perfectly to create a unique piece of creative that resonates and connects with The Fate of the Furious and Dodge fans alike."

"The world of Fast & Furious is inextricably linked to our partners at Dodge," added David O'Connor, Executive Vice President of Global Franchise Management and Brand Strategy, Universal Pictures.  "Time and again, they have proven their commitment to ensuring that the cars are just as beloved characters as the family members who form the heart of the series."

The 30-second national "Muscle Heaven" spot primarily features the 2017 Dodge Challenger. Dealer versions of the ads include one spot for the Dodge Charger and Challenger, and another for the Dodge Durango and Journey.

The spots will air on network programming, including primetime, late night, morning news, sports, and NASCAR, as well as cable entertainment and sports programs. They were created in partnership with Austin, Texas-based GSD&M.

A Spanish-language co-branded "Muscle Heaven" spot has also been created and will run in key Hispanic markets. The ad was created in partnership with the Houston-based Lopez Negrete agency.

Licensed ProductsDodge//SRT brand vehicles, most notably the Dodge Charger and Dodge Challenger, are featured in The Fate of the Furious licensed products. These include various sizes and packs of die-cast and remote control vehicles from Mattel and Jada Toys, many of which are already available in retail stores. Additional upcoming products include the Racing Rivals mobile racing game from Glu Mobile.

Now that Dom and Letty are on their honeymoon and Brian and Mia have retired from the game – and the rest of the crew has been exonerated – the globetrotting team has found a semblance of a normal life.  But when a mysterious woman (Oscar® winner Charlize Theron) seduces Dom into the world of crime he can't seem to escape and a betrayal of those closest to him, they will face trials that will test them as never before.

From the shores of Cuba and the streets of New York City to the icy plains off the arctic Barents Sea, our elite force will crisscross the globe to stop an anarchist from unleashing chaos on the world's stage … and to bring home the man who made them a family.

From muscle cars to minivans, crossovers and full-size SUVs, the Dodge brand's full lineup of 2017 models deliver best-in-class horsepower, class-exclusive technology, unmatched capability and a slew of cool features, such as LED headlamps, Dodge signature racetrack tail lamps, active exhaust, cold-air induction, 8.4-inch touchscreen Uconnect infotainment centers and 7-inch customizable gauge clusters, to name a few. For the 2017 model year, the Dodge brand lineup features the 25th anniversary Viper, Durango, Grand Caravan, Journey, Charger and Challenger, including the new Charger Daytona and Challenger T/A, as well as the 707-horsepower Challenger SRT Hellcat, the most powerful and fastest muscle car ever and the Charger SRT Hellcat, the quickest, fastest and most powerful sedan in the world.