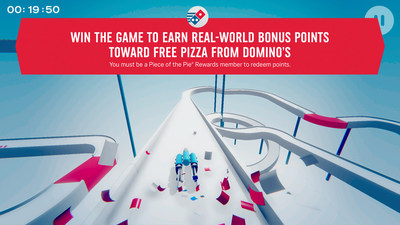 Piece of the Pie Pursuit puts players in the center of Domino's latest TV commercial about Piece of the Pie Rewards®, featuring a custom-built Rube Goldberg machine. Each section provides players with pizza-themed challenges – such as guiding your pizza cutter car along a boost-filled track in a race against the clock or using a pizza sauce "spoodle" to catapult to new heights – and highlights different ways to order Domino's. Players who beat all six levels in the game will receive 10 Piece of the Pie Rewards bonus points toward free pizza once they place their next qualifying order.

"This is the ultimate game for pizza fanatics," said Steve Kennedy, Domino's director of loyalty. "Not only does it have six types of unique gameplay to keep you coming back for more, but it also gives Piece of the Pie Rewards members a chance to earn real-world bonus points toward free pizza."

Domino's is the first and only national pizza delivery chain to offer loyalty points via phone, in-store and online orders – including on any of Domino's AnyWare ordering platforms. Members will receive 10 points per day for any Domino's order of $10 or more. When customers reach 60 points, they can redeem them online for a free medium two-topping pizza. Members can track past purchases, earned points and redeemed points via their Pizza Profile.

The mobile game is available for free download on iTunes or Google Play. Customers who aren't enrolled in Domino's Piece of the Pie Rewards program may do so at dominos.com/rewards.

About Domino's Pizza®Founded in 1960, Domino's Pizza is the largest pizza company in the world based on retail sales, with a significant business in both delivery and carryout pizza. It ranks among the world's top public restaurant brands with a global enterprise of more than 14,800 stores in over 85 markets. Domino's had global retail sales of over $12.2 billion in 2017, with more than $5.9 billion in the U.S. and more than $6.3 billion internationally. In the fourth quarter of 2017, Domino's had global retail sales of nearly $4.0 billion, with nearly $1.9 billion in the U.S. and over $2.1 billion internationally. Its system is comprised of independent franchise owners who accounted for over 97% of Domino's stores as of the fourth quarter of 2017. Emphasis on technology innovation helped Domino's achieve more than half of all global retail sales in 2017 from digital channels, primarily online ordering and mobile applications. In the U.S., Domino's generates over 60% of sales via digital channels and has produced several innovative ordering platforms, including Google Home, Facebook Messenger, Apple Watch, Amazon Echo, Twitter and text message using a pizza emoji. In late 2017, as part of an industry-first collaboration with Ford Motor Company, Domino's began a meaningful test of delivery using self-driving vehicles.