NEW YORK, Feb. 27, 2020 /PRNewswire/ -- World Athletics— formerly the International Association of Athletics Foundation (IAAF)—denied American double-amputee track-and-field athlete Blake Leeper's application seeking approval to compete in World Athletics-sanctioned events, including the Olympic Games, while using his prosthetics, and to have his results listed alongside those of able-bodied athletes.  Mr. Leeper's application was filed on July 3, 2019, along with an expert report by Dr. Alena Grabowski, which established that Mr. Leeper's use of prosthetics does not provide him with an overall competitive advantage over able-bodied athletes. On February 27, 2020, Mr. Leeper appealed World Athletics' decision to the Court of Arbitration for Sport (CAS).

The second ground advanced by Mr. Leeper's appeal asserts that even if it was proper to place the burden of proof on Mr. Leeper to show that he did not have an overall competitive advantage over able-bolded athletes, he has met that burden. To conclude otherwise, World Athletics improperly disregarded the power of the scientific evidence presented by Mr. Leeper, which established that he does not gain an overall competitive advantage when using his prosthetics in track-and-field events.

The Grabowski report, the study through which Mr. Leeper's evidence was submitted, compared five different measurements of specific athletic tasks to determine how Mr. Leeper's use of prosthetics affects his 400-meter running performance compared to the use of biological legs by non-amputee athletes.  The findings from the report led Dr. Grabowski to conclude that, "[b]ased on the balance of probabilities, the use of [prosthetics] do[es] not provide Leeper with a competitive advantage over non-amputee-athletes." World Athletics did not even mention the Grabowski report in its decision denying Mr. Leeper's application, instead relying on its Assistance Research Group's final report containing erroneous critiques of the Grabowski report but no affirmative scientific research contradicting the study. In a supplemental report submitted to World Athletics, Dr. Grabowski demonstrated why the Assistance Research Group's criticisms were "not scientifically correct."

Mr. Kessler made the following statement with the filing of the CAS appeal, which Winston is handling on a pro bono basis:

"Today's appeal is the latest step in Mr. Leeper's fight for equality on behalf of all disabled athletes who have been unjustifiably prevented from competing in sporting events because of their reliance on necessary prostheses.  Since submitting his application to World Athletics, Mr. Leeper has been denied the opportunity to compete in the 2019 World Championships—notwithstanding a fifth-place finish in the 400-meter final at the 2019 USATF Outdoor Championships, with a time that would have qualified him for the World Championships in that event—because World Athletics has stubbornly refused to let him compete.  This injustice must be rectified and we are turning to CAS to seek the same rights for a disabled athlete that it found to be required in the Pistorius proceeding."

Mr. Leeper made the following statement of his own: "World Athletics' decision to bar me from participating in the World Championships was a blow to all disabled athletes, but I will not be deterred.  I trust in CAS to recognize that I do not have any advantage over able-bodied athletes.  I just want a fair chance to compete. For as long as I can remember, I have dreamed of participating in the Olympics with the best runners in the world, and I have shown myself capable of competing with them. But I will need the help of the Court of Arbitration for Sport to make my dream a reality." 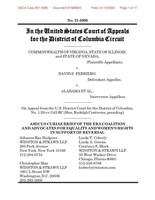