ST. LOUIS, Dec. 9, 2019 /PRNewswire/ -- Drury Hotels Company is bringing a bit of magic to its guests. The company is developing its largest property to date, the Drury Plaza Hotel Orlando Lake Buena Vista, and will begin to welcome guests by spring 2021. The new property, located in the DISNEY SPRINGS® Resort Area in Orlando, Florida, is the company's first Official Walt Disney World® Hotel and the fourth Drury Hotel in the state. The entire project – which includes 604 rooms and more than 12,000 square feet of meeting space – will be complete by the end of 2021, with the first 264 rooms available by spring 2021. The new hotel will feature a host of amenities and is in close proximity to the Walt Disney World® Theme Parks. 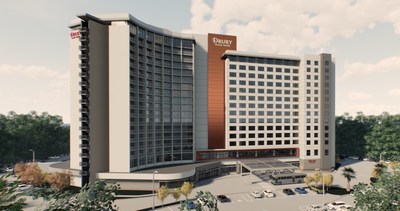 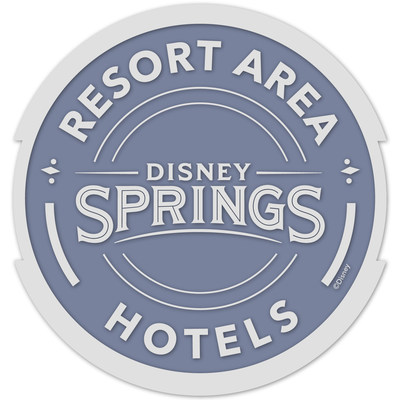 The new property is located just steps away from DISNEY SPRINGS®: a walkable, 120-acre outdoor complex outside of the theme parks featuring an eclectic mix of unique boutiques, one-of-a-kind eateries and entertainment. The hotel will be able to be booked as part of a Walt Disney World® Resort vacation package. Drury also will offer transportation to and from the theme parks, as well as to other surrounding attractions.

"This property has been a long time in the making, and we are delighted to see it take shape," said Chuck Drury, president and CEO of Drury Hotels. "We'll be able to give our guests an unforgettable experience as they visit the Walt Disney World® Resort and everything the colorful community has to offer. Being named an official Walt Disney World® Hotel means we have been entrusted to adhere to exceptional service standards. Given our track record of providing award-winning guest service, I know our top-notch team will make our new property a magical experience for our guests and visitors."

Mike Weihs, a 19-year veteran in the hotel and hospitality industry, has been named the property's general manager. Drury team member Melissa Linkugel will serve as the hotel director of sales. Once open, the hotel will employ 150 full- and part-time team members.

The hotel will feature a resort-style pool, splash pad and poolside cantina bar and grill; an extensive marketplace for grab-and-go food items and sundries; and a kitchen and bar concept, in addition to a wide range of complimentary amenities, including:

Outside of the hotel, guests will be able to enjoy exciting new additions to the Walt Disney World® Resort including Star Wars®: Galaxy's Edge – where guests can live out their own Star Wars story – and Toy Story Land – where kids and grown-ups alike can experience all-new adventures – only found at Disney's Hollywood Studios®. Experience storybook wonder as favorite Disney classics come to life at Magic Kingdom® Park. For some big-time enchantment, take a ride into the mine "where a million diamonds shine" aboard Seven Dwarfs Mine Train. Discover big fun and cultures from around the globe at Epcot®. And while there, take a sail through Arendelle on Frozen Ever After. Explore the realm of creatures that inhabit the world...and the imagination...and create a unique adventure at Disney's Animal Kingdom® Theme Park. Celebrate the magic of nature by soaring on banshees through the exhilarating Avatar Flight of Passage. From fantasy and discovery, to spotlights and adventure, the magic of Walt Disney World® Theme Parks comes alive around all who visit.

Drury Hotels has been family-owned and operated since 1973. For a complete listing of all Drury hotels or for reservations, visit www.druryhotels.com or call 1-800-DRURYINN. For information about career opportunities at Drury Hotels, please apply online at www.drurycareers.com.

About Drury Hotels Company Drury Hotels Company is a Missouri-based, family-owned and operated hotel system with more than 150 hotels in 25 states. Founded in 1973, Drury Hotels has been recognized by the J.D. Power 2019 North America Hotel Guest Satisfaction Index Studysm, earning the award for "Highest in Guest Satisfaction Among Upper Midscale Hotel Chains." In 2019, Drury received this award for a record 14th consecutive year.* Brands include Drury Inn & Suites®, Drury Inn®, Drury Plaza Hotel®, Drury Suites®, Pear Tree Inn by Drury®, as well as other hotels in the mid-priced hotel segment. Drury Hotels continues to provide exceptional value for business and leisure travelers with its many free amenities – Travel Happy®. For more information, visit www.druryhotels.com or call 1-800-DRURYINN. Join the conversation on Twitter @druryhotels or on Facebook.

*Drury Hotels received the highest numerical score among upper midscale hotels in the proprietary J.D. Power 2006-2019 North America Hotel Guest Satisfaction Index Studiessm. The 2019 study is based on responses gathered between June 2018 and May 2019 from 44,890 guests in Canada and the United States who stayed at a hotel in North America between May 2018 and May 2019. For more information, visit www.jdpower.com.

About Disney Springs® Disney Springs is a one-of-a-kind retail, dining and entertainment district located in the heart of the Walt Disney World Resort in Florida. With its namesake springs, beautiful open-air promenades and lakefront setting, Disney Springs evokes the charm of Florida waterfront towns at the turn of the 20th century. It's also home to a collection of more than 150 shops and restaurants, including top-name retail brands, specialty boutiques and dining experiences created by celebrity and award-winning chefs.  Located in Lake Buena Vista, Fla., Disney Springs is open daily.