BOSTON and CANTON, Mass., Oct. 1, 2018 /PRNewswire/ -- Two of America's iconic beverage brands are bringing a bold new way for fans to toast the start of fall. Dunkin' and Harpoon Brewery, New England staples with millions of fans across the country, have come together for the first time to combine the taste of Dunkin's Espresso Blend Coffee with Harpoon's famous craft beer, launching the new Harpoon Dunkin' Coffee Porter. A balanced and smooth brew offering robust and roasty notes, Dunkin' Coffee Porter was created by Harpoon as a tribute to all the days that Dunkin' has helped the brew masters fire up the brew kettle. 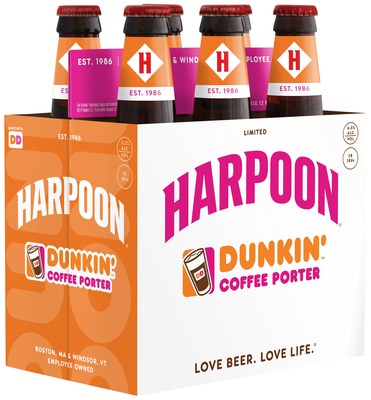 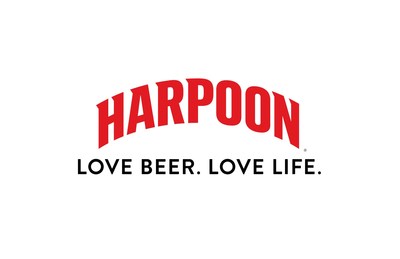 Beginning today, Harpoon Dunkin' Coffee Porter will be available throughout the fall, in both 12 oz. bottles and draft at select retail locations across the Eastern U.S.  At 6 percent ABV, Dunkin' Coffee Porter is a malty tasting brew that has a smooth mouthfeel with aromas of espresso and dark chocolate. The new brew pairs perfectly with fall favorites like hearty stews, seasonal desserts, tailgating and, of course, Dunkin's signature donuts.

According to Tony Weisman, Dunkin' U.S. Chief Marketing Officer, "Our brands have such passionate, loyal fans, who start their busy day with a cup of Dunkin' coffee and end it by enjoying one of Harpoon's famous craft beers. We're thrilled to now finally bring the two together, partnering with one of the most respected craft breweries in the country to offer coffee lovers and beer enthusiasts alike a classic new taste to celebrate the season."

"Dunkin' has been there for us since the early days when getting the brewery up and running required a lot of beer, and even more coffee," said Dan Kenary, CEO and Co-Founder of Harpoon Brewery. "We couldn't think of a better way to pay tribute to the company that's helped fuel our success than to create something special for our fans by combining the taste of their favorite morning brew with one of ours."

To learn more about Dunkin', visit www.DunkinDonuts.com, or subscribe to the Dunkin' blog to receive notifications at https://news.dunkindonuts.com/blog.

To learn more about Harpoon Brewery and find Dunkin' Coffee Porter near you, visit https://www.harpoonbrewery.com/beer-finder.

Founded in 1950, Dunkin' is America's favorite all-day, everyday stop for coffee and baked goods. Dunkin' is a market leader in the hot regular/decaf/flavored coffee, iced regular/decaf/flavored coffee, donut, bagel and muffin categories. Dunkin' has earned a No. 1 ranking for customer loyalty in the coffee category by Brand Keys for 12 years running. The company has more than 12,600 restaurants in 46 countries worldwide. Based in Canton, Mass., Dunkin' is part of the Dunkin' Brands Group, Inc. (Nasdaq: DNKN) family of companies. For more information, visit www.DunkinDonuts.com.

About the Harpoon Brewery

The Harpoon Brewery was founded in 1986 by beer lovers who wanted more and better beer options. When the Brewery was founded, Harpoon was issued Brewing Permit #001 by the Commonwealth of Massachusetts, since it was the first to brew commercially in Boston after a dormant period of about 25 years. Harpoon's line of craft beer features its award winning IPA and seasonal beers, along with special limited releases. In 2014, Harpoon became employee owned.

(Trick-or-)Treat Yourself to a New Peanut Butter Cup Macchiato at ...