THE HAGUE, The Netherlands, June 15, 2020 /PRNewswire/ -- Mellon Medical, a Dutch MedTech company focusing on the introduction of single handed surgical suturing devices, today announced the signing of an agreement with (medical) technology and systems designer Demcon of Enschede, The Netherlands, to further advance the Switch® towards market introduction. The Switch® is a (single patient use) precision surgical suturing device for abdominal wall closure, ideal for enabling the 'small bites' technique. This will reduce the risk of complications such as post-surgery incisional hernia, resulting in improved patient outcome and a substantial reduction of healthcare costs. 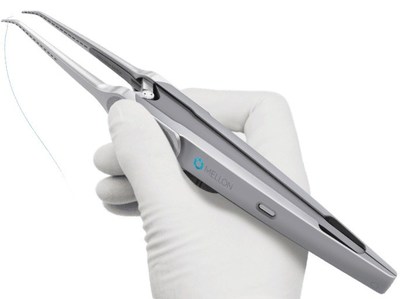 Along with this agreement Demcon will become a new shareholder in Mellon, contributing to the € 4 million in new development funds together with existing shareholders BGV (BioGeneration Ventures), OostNL, Brabantse Ontwikkelings Maatschappij (Brabant Development Company), David Pyott and Thuja Capital.

Laparotomies involve large incisions through the abdominal wall to gain access into the abdominal cavity - procedures such as visceral, gynecological, aortic vascular, or urological surgery. In the US, 4-5 million laparotomies are done annually. The current practice is the big-bites technique using the classical suturing tools. Clinical studies have shown that big-bites techniques relate to a high occurrence of incisional hernia of up to 35% and even up to 69% in high risk patients, reducing the patients' quality of life. This also has a major impact on healthcare costs. In US alone, more than 400.000 repairs are done annually, costing more than $4 billion. And still, repair of incisional hernia has a high failure rate of over 30%, even with the use of surgical mesh. Using the Switch® with small-bite technique would lead to cost savings of up to $2 billion per year in the US alone.

A large Dutch investigator funded double blind, multicentre, randomized controlled trial, at surgical and gynecological departments in ten hospitals in the Netherlands, published in The Lancet in 2015, clearly showed that the small bites suture technique is more effective than the traditional large bites technique for prevention of incisional hernia. Therefore, it should  become the standard closure technique for midline incisions. Tests with the prototype were done in November 2019 at Erasmus MC in Rotterdam, the Netherlands, by two experienced surgeons. Their feedback was that the Switch's straight needle for fascia is preferable to a curved needle and that it resulted in more regular suturing patterns. In addition, the surgeons experienced the design ergonomic and easy to use.

"The use of small bites significantly reduces the occurrence of incisional hernias. Therefore, it is essential that the small-bites technique would be used by any surgeon who closes the abdomen after surgery. And if that technique can be accelerated and facilitated with a device, that could be very important."

Jan Benschop, CEO of Mellon Medical,  commenting on this new direction of the company, said:

"By working with medical specialists, and the new collaboration with the renowned and highly skilled medical  technology designer Demcon, being also one of our key new investors, and ergonomic experts in the development of the Switch®, Mellon will be able to reinvent suturing, bringing innovative suturing technology into the 21st century. Our mission is to improve medical procedures by providing the best possible tools. We believe our innovative platform suturing technology will improve patient outcome and reduce overall healthcare costs."

Conventional suturing versus The Switch®

Classical suturing is a complex process and takes a long time to learn. Focus is on getting control over the needle. Surgeons using conventional suturing techniques need many coordinated motions using both hands in order to place a single suture. On average, 30% of the operation time is spent on suturing.

Mellon has managed to reinvent the technique of suturing. The Switch® can be operated by lightly pinching the double-action buttons with thumb and index finger of one hand. The other hand is free to present the tissue to be sutured. This technique greatly improves the precision and efficiency of the suturing process, as surgeons no longer need to switch the needle between instruments and focus on getting control over the needle.

In the Switch®, the needle is always secured in one of the two jaws. The predictable linear path followed by the straight needle causes less motion friction, resulting in a high-quality connection of the tissue layers.

The annual worldwide sutures and suturing devices market size is estimated over $3 billion by 2023.

Mellon Medical was founded with the objective of developing a new medical device that enables more efficient and effective suturing of both tubular and layered structures. Having long been aware of the complexity of suturing such tissue through many years of surgical practice, the founders strongly believed that suturing with one hand could improve the procedure and therefore patient outcome.

Mellon's Switch® was designed to accomplish the most accurate suturing in half the time. Its main competitor is classical suturing, done with a needle holder and forceps, as both techniques use a suture thread to ligate the tissue.

Thanks to Mellon's patent portfolio, consisting of four patent applications, the company has effectively protected both its current technology, as well as their possible future diversification, allowing for scalability of Mellon's product offering.

Following a Series A and now B funding round, investors Thuja Capital, Brabantse Ontwikkelings Maatschappij (Brabant Development Company) and OostNL (Eastern Netherlands Private Equity Company) joined as shareholders as early as May 2013. The first innovation loan was granted by the Netherlands Enterprise Agency in 2014. In September 2017 a new financing round of € 6 million was closed with BGV (BioGeneration Ventures), personal investor David Pyott, and existing shareholders. These existing shareholders, as well as development partner Demcon, participated in the current series B financing round.