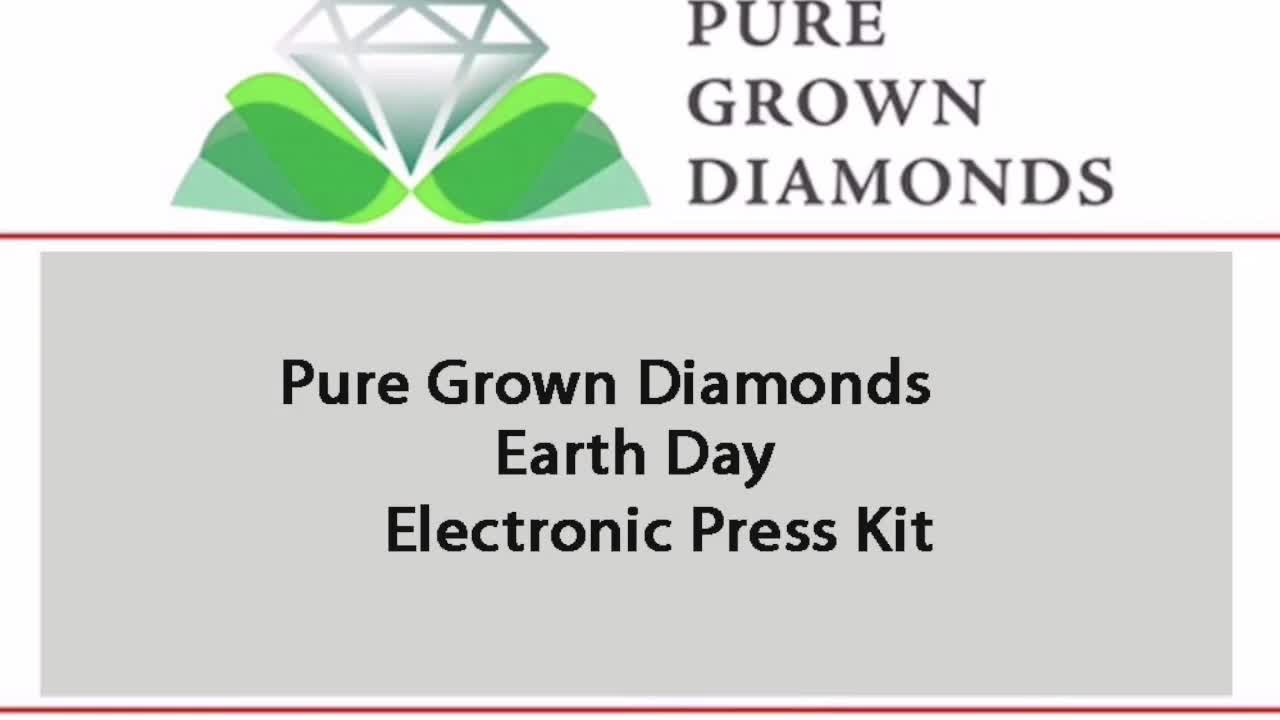 "Our physicists have perfected the laboratory process of replicating the earth's natural crystallization of carbon into alluring, scintillating, sizeable diamonds for the luxury jewelry, engineering, high-tech, precision-cutting instrument and semi-conductor industries," says Pure Grown Diamonds President and CEO Lisa Bissell. “Pure Grown Diamonds are indistinguishable from mined diamonds, even under a microscope, according to the Gemological Institute of America and International Gemological Institute.”

Bissell adds that Pure Grown Diamonds, on average cost 30 to 40 percent less than mined diamonds. She emphasizes that GIA is a nonprofit gem research institute dedicated to protecting the public by providing education and objective, unbiased gem evaluations but it does not evaluate the monetary value of diamonds or Pure Grown Diamonds.

"Diamonds are a girl's best friend but diamond mining is Mother Earth's enemy," says Bissell. "We have unlocked the code that will help spare the earth from further damage and solve the dilemma of rapidly depleting diamond mines." (See Frost & Sullivan Report Below)

Academy Award winner Patricia Arquette previewed The World's Largest Laboratory-Cultivated Pure Grown Diamond in Hollywood at a pre-Oscar soirée. It is a 3.04 carat, near colorless diamond – priced at $23,000 compared to an identical earth-mined diamond selling for more than $40,000.

The United States Federal Trade Commission concludes that these diamonds have the same chemical, optical and physical properties as mined diamonds.

"They are the world's only true eco-friendly, conflict-free diamonds because they are grown in the laboratory opposed to being dug-up from deep below the earth's crust," says Bissell.

Pure Grown Diamonds are available at 147 U.S. Jewelry stores in 31 states, the District of Columbia and online at www.PureGrownDiamonds.com

Since 1954, when General Electric first invented the process of creating industrial diamonds in a laboratory, scientists have been trying to grow diamonds of significant carat size and brilliance, without much success.

In 2014, after 30 years of his own research and development, physicist and inventor Dr. Devi Shanker Misra, PhD perfected the patented Pure Grown Diamonds process when he grew the world's largest lab-cultivated diamond.

Dr. Misra explains how he grows diamonds. "We place a small transparent carbon plate, known as a seed, in a microwave chemical vapor deposition chamber. Hydrogen and methane gases are combined with electrical energy. A plasma ball ignites. Soon after, carbon molecules begin forming and then rain on the seeds. Six to 10 weeks later, the diamonds mature. They are laser cut and polished. Finally, the girdle of each diamond is laser-scribed with a serial number and the words, 'Laboratory Grown'."

He adds, "Laser-scribing is a voluntary act of transparency that avoids co-mingling with earth mined diamonds."

Misra stresses, "We are revolutionizing and changing the landscape of the diamond industry, forever."

"Diamonds have superlative properties that are unmatched by any other materials on the planet," explains IIa (2a) Technologies CEO Vishal Mehta. "We are growing Type IIa diamonds, which are considered the rarest and purest -- with unsurpassed brilliance, clarity, hardness, thermal conductivity and transparency."

He continues, "Type IIa diamonds are unaffected by radiation; they have some of the highest carrier motilities and velocities and are electrically-insulating."

"Only two percent of the world's earth-mined diamonds are Type IIa. Queen Elizabeth and Elizabeth Taylor are amongst the very few women in the world who could afford Type IIa diamond jewelry," explains Bissell. "However, Pure Grown Diamonds is growing Type IIa diamonds affordable to everyone."

"Although 25 percent of IIa Technologies' greenhouse-grown diamonds are sold for luxury jewelry, the remaining 75 percent are for critical high-tech and industrial applications," says Mehta. "Most people associate diamonds with jewelry. What they do not realize is how important they are to the advancement of 21st Century life."

Eight years ago, Mehta partnered with Dr. Misra to create a commercially viable and sustainable process of growing diamonds in a laboratory greenhouse that rival mined diamonds in every aspect. And, in doing so, the pair surmised they could help solve the world demand for diamonds and curtail the catastrophic effects of mining.

Mehta is a master's degree graduate in Business Administration and International Management from Arizona State University's Thunderbird School of Global Management; a Gemological Institute of America certified gemologist whose family has been pioneers in the gem and jewelry industries for three generations.

Dr. Misra is a former professor at the Indian Institute of Technology, Bombay, Mumbai, India. He has secured numerous patents and published more than 70 research studies on his work growing diamonds. He has shared his research and provided his diamond seeds to numerous peer-professors working on various lab-grown diamond applications at the following universities and laboratories.