OAKLAND, Calif., July 23, 2018 /PRNewswire/ -- On August 1, Earth Overshoot Day will mark the date when humanity's annual demand on nature exceeds what Earth's ecosystems can renew this whole year, according to Global Footprint Network, an international research organization. In other words, humanity is currently using nature 1.7 times faster than our planet's ecosystems can regenerate—or "using 1.7 Earths." 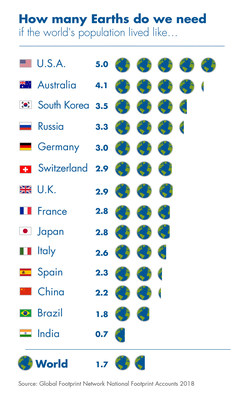 Global Footprint Network calculates Earth Overshoot Day every year using Ecological Footprint accounting, which adds up all of people's competing demands on productive land for food, timber, and fibers; absorption of carbon emissions from burning fossil fuels; and built infrastructure. August 1 is the earliest date since the world went into ecological overshoot in the 1970s.

The costs of this overspending include deforestation; collapsing fisheries; fresh-water scarcity; soil erosion; biodiversity loss; and the buildup of carbon dioxide in the atmosphere, leading to climate change and more severe droughts, wildfires, and hurricanes. These threats can produce desperation and force people to migrate to cities or other countries.

"As we mark Earth Overshoot Day, today may seem no different from yesterday—you still have the same food in your refrigerator," said Global Footprint Network CEO Mathis Wackernagel. "But fires are raging in the Western United States and in Cape Town, South Africa, residents have had to slash water consumption in half since 2015. These are consequences of busting the ecological budget of our one and only planet.

"Our economies are running a Ponzi scheme with our planet. We are using the Earth's future resources to operate in the present and digging ourselves deeper into ecological debt," Wackernagel continued. "It's time to leverage our creativity and ingenuity to create a prosperous future free of fossil fuels and planetary destruction."

Global Footprint Network and its partners will mark Earth Overshoot Day 2018 with several events, including:

Cities, energy, food and population are four solution areas which Global Footprint Network has identified with the most potential to address ecological overshoot. Individuals are invited to mark Earth Overshoot Day by calculating their Personal Overshoot Day and Ecological Footprint at www.footprintcalculator.org and taking a "Step to #MoveTheDate" at www.overshootday.org/steps-to-movethedate/.

Although 86% of the world's population lives in a country with an ecological deficit, the latest national Ecological Footprint data reveals some encouraging signs:

Global Footprint Network is changing how the world manages its natural resources and responds to climate change, through