SHANGHAI, June 11, 2021 /PRNewswire/ -- On June 9, China Eastern Air Logistics Co., Ltd. (601156. SH) was listed on the main board of Shanghai Stock Exchange, issued "the first share of mixed ownership reform of aviation". It soared 44 percent on listing day and its share price reached the upper limit of 22.71 yuan ($3.55) per share at the Shanghai Stock Exchange on Wednesday. 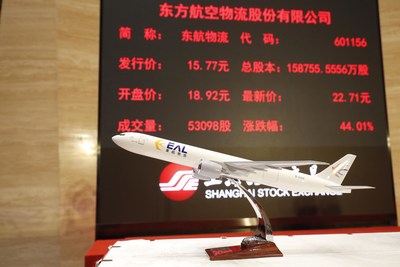 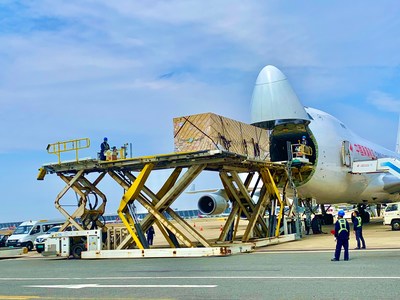 By the end of 2020, China Cargo Airlines, a subsidiary of Eastern Air Logistics, has sufficient cargo resources including 10 cargo planes and 725 passenger planes. Relying on SkyTeam, Code Sharing and SPA agreements, the route network reaches 1,036 destinations in 170 countries around the world. Eastern Air Logistics has 17 self-operated cargo terminals and covers 12 airports. Among them, Shanghai Pudong Airport and Shanghai Hongqiao Airport are the main bases of EAL, while Shanghai Pudong Airport is the third largest airport in the world in terms of cargo and mail throughput.

Financial data show that from 2016 to 2020, the operating income of Eastern Air Logistics was increased from 5.837 billion yuan to 15.11 billion yuan, with an average annual growth rate of 26.84%; the total profit was increased from 485 million yuan to 3.638 billion yuan, achieving a 65.48% annual profit growth rate; the asset-liability ratio was dropped from 85.88% to 37.39%, and net asset was increased by 6.72 times. The passive situation of continuous loss was reversed at one stroke, and the vitality, profitability and risk resistance of the company were also significantly enhanced.

It is claimed by the International Air Transport Association (IATA) that according to the global air transport data in January 2021, the global air cargo demand exceeded the level in January 2019. Willie Walsh, president of IATA, said that the demand for air cargo not only recovered from COVID-19 epidemic crisis, but also continued to grow. One of the main challenges facing by air cargo is to obtain sufficient capacity. He said that by understanding the recovery of passenger demand, the prospect of air cargo capacity can be clearly defined, and that the efficient layout of air cargo operation will be the key to a full recovery.

It is known that through flexible adjustment of the global route network, transport capacity direction and aircraft structure, Eastern Air Logistics has given priority to the transportation of vaccines and other important materials. EAL has flown to more than 20 countries and carried out all kinds of anti-epidemic flights, transporting more than 70,000 tons of medical materials.