GOSHEN, N.Y., Aug. 16, 2018 /PRNewswire/ --  More than 100 members of the media and special guests joined officials with Merlin Entertainments to get the first look at the eight themed "lands" that will make up the 150-acre LEGOLAND® New York Resort at the family theme park's future site in Goshen, New York. Thousands of LEGO® bricks cascaded down resembling a waterfall revealing a 10-foot LEGO model of the entire theme park!  The model is made of more than 135,000 LEGO bricks and took 20 Master Model Builders more than 1,300 hours to design and build. 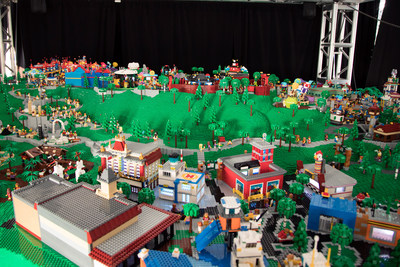 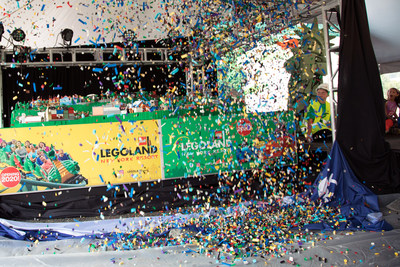 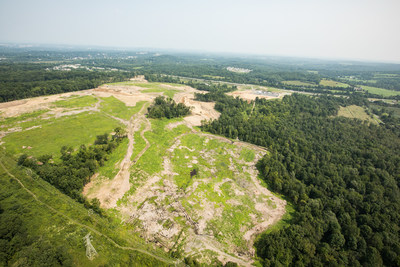 "LEGOLAND New York is coming and it's time to get excited," said LEGOLAND New York's Public Relations Manager Matt Besterman. "This will be the ultimate must-see destination for families in the Northeast."

Helping to unveil the model and illustrate the Park's design were a group of local children, including friends and family members of the Park staff and construction team. The children dressed in costumes to represent each land of the Park.

"For those who may only be familiar with our indoor LEGOLAND® Discovery Centers, a LEGOLAND Park is on a different scale altogether," Besterman said. "This 150-acre theme park is a multi-day experience with more than 50 rides, shows and attractions – all designed for kids ages 2-12 and their families."

LEGOLAND New York will take visitors on a journey through eight themed lands:

"LEGOLAND New York has been in the works for years and we're excited to bring this unique family theme park to Goshen!" said Head of Public Relations North America for Merlin Entertainments Julie Estrada. "Built on a 500-acre site just 60 miles northwest of New York City, LEGOLAND New York Resort is the first major theme park in decades to be built in the northeast – aiming to be the ultimate family destination for visitors from New York, New Jersey, Connecticut, Pennsylvania, Massachusetts, and beyond."

Scheduled to hold its grand opening in spring 2020, the Park will be open seasonally from spring to fall.

From the outset, the Resort will feature a LEGOLAND Hotel, which will be open year-round. Each of the Hotel's 250 rooms will be themed to a popular LEGO toy to be announced at a later date.

"The LEGOLAND Hotel is an experience in itself," Besterman said. "You'll find a restaurant with a kid-sized buffet table, a Castle play area, and children's entertainment every night. It's our way of extending the LEGOLAND experience creating treasured memories for families."

About Merlin Entertainments plc Merlin Entertainments plc is a global leader in location based, family entertainment. As Europe's number one and the world's second-largest visitor attraction operator, Merlin now operates more than 120 attractions, 18 hotels and six holiday villages in 25 countries across four continents. The company aims to deliver memorable experiences to more than 65 million visitors worldwide, through its iconic global and local brands, and the commitment and passion of its 29,000 employees (peak season).

Everything Is Awesome! LEGOLAND® New York Resort Is Fully Open...