NEW YORK, June 15, 2020 /PRNewswire/ -- Elysium Health, Inc.™, a life sciences company developing clinically validated health products based on advancements in scientific research, today announced the launch of MATTER by Elysium Health, a long-term brain health supplement developed in partnership with the University of Oxford. Matter contains a formulation of specific B vitamins that was developed by researchers at the University of Oxford and clinically proven to slow brain atrophy associated with age-related memory loss, a powdered omega-3 lysine complex with enhanced bioavailability to optimize efficacy of the B-vitamin complex, and a bilberry extract rich in plant-based antioxidants called anthocyanins to provide complementary cognitive benefits. Matter's formulation is the result of the findings of the VITACOG study conducted at the University of Oxford, which demonstrated that supplementation with a specific B-vitamin complex together with a good omega-3 fatty acid status slows grey matter atrophy in regions of the brain that are important for learning and memory by up to 86%. Elysium Health's partnership with the University of Oxford includes the exclusive license to use the B-vitamin complex for dietary supplement and medical food applications to support long-term brain health and normal cognitive function, slow grey matter atrophy in regions that are important for learning and memory, and help to regulate normal homocysteine metabolism. 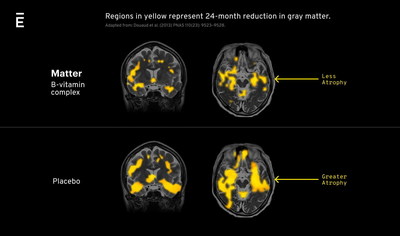 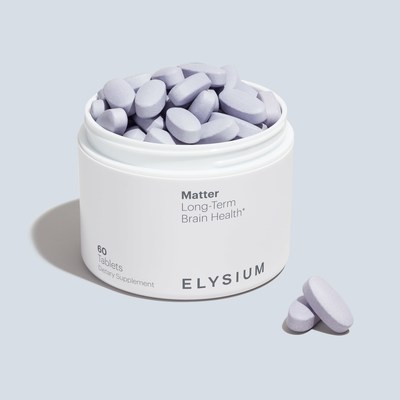 The company also announced the addition of University of Oxford professor emeritus of pharmacology A. David Smith, Ph.D., an inventor on the patent and patent applications, who joined Elysium Health's renowned scientific advisory board, which comprises more than 25 world-renowned researchers and clinicians, including eight Nobel Prize-winning scientists. "I came into the field of dementia research driven both by my neuroscience research and by my mother's battle with Alzheimer's disease," said professor Smith. "In 1988, I co-founded the Oxford Project to Investigate Memory and Ageing (OPTIMA) with the aim of bettering our understanding of the disease. We recruited a large number of patients and volunteers and started annual brain imaging studies, looking for particular markers of brain aging. We soon found that one driver of atrophy in the temporal lobe is raised blood levels of homocysteine. Theorizing that nutritional factors were an important part in the prevention of brain atrophy, we began the VITACOG trial to see if we could slow brain atrophy by lowering homocysteine with B vitamin treatment. The results were more strikingly positive than we could have dreamt."

Age-related shrinkage of the brain is a hallmark of the aging process that has been observed universally. Over the human lifespan, the whole brain atrophies by as much as 20% in healthy adults, but in disease states the rate of atrophy can be much higher. Shrinkage is widespread and includes grey matter regions involved in complex behaviors such as decision making, memory, and executive function. Lifestyle factors, such as smoking, poor sleep habits, and excessive alcohol consumption have been shown to accelerate the progressive decline in grey matter volume. Meanwhile, healthy behaviors such as physical exercise, meditation, and adherence to a Mediterranean diet are associated with reduced brain atrophy. Techniques to slow the progressive loss of grey matter are believed to represent a promising approach to maintain cognitive vitality with aging.

"At Elysium Health, we develop novel products with the world's best scientists and institutions to help people lead healthier lives," said Elysium Health CEO Eric Marcotulli. "The combination of the B vitamins – at the precise doses and ratios that were shown to slow brain atrophy – with a superior omega-3 to enhance their efficacy makes Matter a momentous advancement in consumer health that is truly novel. Regardless of health status, our brains all atrophy as part of the aging process – Matter is the first cognitive health product backed by research from the University of Oxford to address this pervasive need and some of the deficits that underly it. As a researcher, Dr. Smith has dedicated his career to understanding and preventing the age-related decline in cognitive function, and we're honored to have him join our Scientific Advisory Board to help us further explore Matter's ability to support long-term brain health."

High plasma concentrations of the amino acid homocysteine have been shown to correlate with the rate of brain shrinkage in healthy elderly individuals and are associated with a number of age-related conditions. Studies have shown that a good B-vitamin status is important in maintaining normal homocysteine levels. Data from the third National Health and Nutrition Survey (NHANES III) – a population-based sample of U.S. residents – found that approximately two thirds of cases of high homocysteine concentrations were associated with low levels of specific B vitamins.

During the first month of the product's initial limited release, Matter will be available for purchase to existing Basis subscribers and customers of select partner brands. In addition to early access, presale customers also have the benefit of preferred pricing during the limited release period.

In 2019, Elysium Health added Index – an at-home biological age test powered by the company's proprietary algorithmic platform for epigenetic examination (APEX) – to its product portfolio. Recently, Elysium Health launched APEX for researchers, which allows scientists and clinicians to easily incorporate DNA methylation into their research with validated technology that delivers a single precise datapoint, rather than groupwise correlations. Elysium Health is currently exploring new Index applications, including measures of cognitive function and cellular senescence, as well as new intervention products that target fundamental processes of aging, and intends to launch additional products in 2020 and 2021.

About Elysium Health™Elysium Health's™ mission is to solve the biggest challenges in health with science, to help people lead healthier lives. Working directly with the world's leading scientists and clinicians, Elysium Health™ is committed to translating critical advancements in scientific research into health solutions people can access today. Learn more at www.elysiumhealth.com.