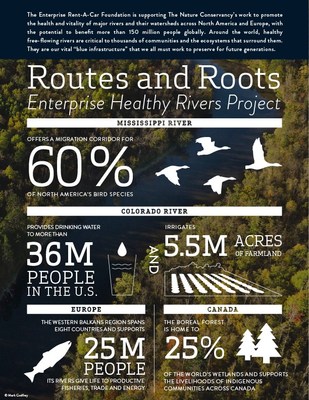 The project highlights the strategic importance of "blue infrastructure" – rivers and regional watersheds – which not only supply drainage and outflow for rainfall and streams, but also strengthen habitats and farmlands, generate renewable energy and provide cost-efficient transportation options.

"This contribution is one of the biggest gifts we have received in many years," said Mark Tercek, President and Chief Executive Officer for The Nature Conservancy. "It will benefit both people and wildlife across two continents, while facilitating the sharing of best practices to drive global progress in conservation. This effort to preserve great rivers is about more than just protecting fresh water today – it also demonstrates Enterprise's leadership, vision and commitment to making a difference for the long term."

Founded in 1982, the private Enterprise Foundation is the philanthropic arm of the Enterprise Rent-A-Car brand and Enterprise Holdings, the world's largest car rental company and an industry leader in transportation and travel. Carolyn Kindle Betz, Senior Vice President and Executive Director of the Foundation, made today's announcement from the company's world headquarters in St. Louis.

"Our philanthropic focus is not always directly related to our business, but instead reaches beyond to make a difference and improve the quality of life wherever our employees and customers live and work," noted Kindle Betz, granddaughter of the late Jack Taylor, who founded Enterprise 60 years ago in St. Louis. "We're thrilled to support and partner with a world-class organization like The Nature Conservancy in this effort to help ensure that healthy rivers continue to enrich our lives for generations to come."

The Nature Conservancy will use the Enterprise Rent-A-Car Foundation's $30 million donation to help protect and preserve four major rivers and watersheds across North America and Europe:

"My family and our company have deep roots in St. Louis, and one of the world's greatest rivers runs right through our hometown," said Kindle Betz. "But in light of Enterprise's international expansion, it was important that this gift benefit communities and their surrounding environment worldwide. We hope it will help more and more people understand and support the critical role rivers play in our lives."

"We believe that understanding will lead to respect," she said. "And what people respect, they will also protect."

About The Nature ConservancyThe Nature Conservancy is a global conservation organization dedicated to conserving the lands and waters on which all life depends. Guided by science, we create innovative, on-the-ground solutions to our world's toughest challenges so that nature and people can thrive together. We are tackling climate change, conserving lands, waters and oceans at an unprecedented scale, providing food and water sustainably and helping make cities more sustainable. Working in 72 countries, we use a collaborative approach that engages local communities, governments, the private sector, and other partners. The Nature Conservancy works in Canada with its affiliate TNC Canada, a registered Canadian charity. To learn more, visit www.nature.org or follow @nature_press on Twitter.