All dollar amounts are expressed in US$

VANCOUVER, May 7, 2020 /PRNewswire/ - Equinox Gold Corp. (TSX: EQX, NYSE American: EQX) ("Equinox Gold" or the "Company") is pleased to announce a positive preliminary economic assessment ("PEA") for development of an underground mine at the Company's 100% owned Aurizona Gold Mine ("Aurizona") in Brazil. The underground mine could be operated concurrently with the existing open-pit mine and has the potential to deliver an additional 740,500 ounces ("oz") of gold, $1 billion in revenue and $204 million in after-tax net cash flow over a ten-year mine life at a base case gold price of $1,350 per oz. 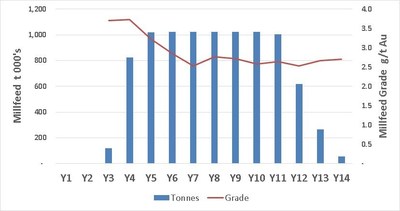 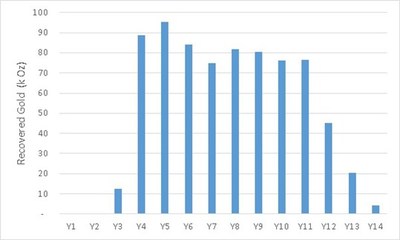 PEA Highlights for the Piaba Underground Mine (at $1,350/oz gold)

Christian Milau, CEO of Equinox Gold, stated: "This PEA demonstrates the substantial opportunity for both mine life extension and increased annual gold production at Aurizona through development of an underground mine. With the potential for expansions to the current open-pit, additions of other near-surface resources and further opportunities for Piaba underground resource expansion at depth and along strike, Aurizona is expected to be a long-life cornerstone asset for Equinox Gold."

The PEA is included in Section 24 of the "Technical Report on the Aurizona Gold Mine, Brazil" (the "Technical Report") dated April 27, 2020. The Technical Report was prepared by AGP Mining Consultants Inc. ("AGP") with contributions by Equity Exploration Consultants ("Equity") and will be filed within 45 days on SEDAR at www.sedar.com, on EDGAR at www.sec.gov/EDGAR and on the Company's website at www.equinoxgold.com. The PEA is preliminary in nature and includes Inferred Mineral Resources that are considered too speculative geologically to have the economic considerations applied to them that would enable them to be categorized as mineral reserves. There is no certainty that the results contemplated in the PEA will be realized.

The Piaba mineral deposit contains high-grade gold mineralization in a multiple vein system that extends at least 4 kilometres along the Aurizona Shear Zone. The mineralization extends below the open-pit that is currently in production at Aurizona, has been drill tested to a depth of approximately 600 metres from surface and remains open at depth and along strike. The current underground portion of the resource estimate includes an Indicated Resource of 7.3 million tonnes grading 1.96 g/t gold and an Inferred Resource of 16.5 million tonnes grading 1.98 g/t gold. Only the portion of the Indicated and Inferred Mineral Resource that is within the PEA mine design and above a cut-off grade of 1.50 g/t to 1.85 g/t (depending on depth) is included in the base case PEA underground mine plan.

The underground deposit could be mined and processed concurrently with mill feed from the open-pit at Aurizona resulting in a higher average mill feed grade. Underground mine production would be processed through the existing 8,000 t/d plant and use other existing surface infrastructure. Base case PEA economics for the underground mine were determined using a gold price of $1,350/oz and include a 1.5% royalty payable to the Brazilian government and a 3% royalty payable to Sandstorm Gold Royalties2.

Table 1: Summary of Results of Base Case PEA for the Piaba Underground Mine

The PEA contemplates development of an underground mine along a total strike length of 3.3 kilometres to access an initial eight separate mining areas. The internal ramps will be accessed from surface by a common main double ramp arrangement developed directly into fresh rock from within the existing open-pit. All mine development is in more stable rock units located on the hangingwall side of the mineralized body (Figure 1).

The proposed mining method is long-hole stoping due to the good ground conditions and steep dip of the deposit. The PEA contemplates owner mining of stopes and underground development. Completed stopes would be filled by rockfill from underground development or open-pit waste. The addition of cement to rockfill is confined to the higher-grade areas where mining recovery can be maximized by eliminating the need for rib pillars and above sill pillars.

First mill feed from the underground mine would be expected approximately 2.25 years after the start of underground mine development, with steady-state production of 2,800 t/d being achieved at the end of year four and continuing through year 11 within the currently defined mineral resource (Figure 2). The mine plan schedules higher-grade areas earlier in the underground mine life to enhance mine economics (Figure 3).

The underground mine will use and benefit from the existing process plant and other infrastructure currently used by the operating open-pit mine including power, water and tailings storage facilities. No additional processing or other surface infrastructure is contemplated in the PEA and capital estimates are confined to underground mine development and sustaining costs. Initial capital costs are estimated at $69.7 million and sustaining capital is estimated at $138.4 million over the duration of the PEA mine plan (Table 2). Total initial and sustaining capital cost estimates include a 25% contingency and recoverable and non-recoverable taxes.

Table 2: Summary of Base Case PEA Underground Mine Capital Estimates

Base case PEA operating costs and site all-in sustaining costs for the underground mine are provided in Table 3.

Table 3: Summary of Base Case PEA Operating Costs and AISC1

The PEA includes the results of additional studies examining potential improvements in overall mine (open-pit and underground) economics by raising the elevation of the current interface between the open-pit and underground mine and accelerating mine development to increase annual underground production rates. In all cases assessed, the addition of the underground component to the Aurizona open-pit operation as outlined in the July 2017 "Feasibility Study on the Aurizona Gold Mine Project, Maranhão, Brazil" (the "Feasibility Study") improves the net life-of-mine cash flow and NPV. The PEA clearly demonstrates the benefits of including underground mining beneath the currently defined Piaba open-pit, with the base case PEA underground development resulting in the highest NPV5%. However, future delineation of additional open-pit reserves may improve the economics of alternative underground scenarios.

Gordon Zurowski, P. Eng. (AGP), Neil Lincoln, P. Eng. (AGP), Eleanor Black, P. Geo. (Equity), and Trevor Rabb, P. Geo. (Equity) are the qualified persons as defined under National Instrument 43-101 that prepared the technical report entitled "Technical Report on the Aurizona Gold Mine, Brazil" dated April 27, 2020, which forms the basis of the disclosure and the PEA that is described in this news release. All of the qualified persons are independent of the Company and reviewed and approved of the contents of this news release.

The mineral resource estimates were prepared in accordance with standards as defined by the Canadian Institute of Mining, Metallurgy and Petroleum ("CIM") "CIM Definition Standards on Mineral Resources and Mineral Reserves" adopted by CIM Council on May 10, 2014.

Equinox Gold is a Canadian mining company with six producing gold mines, a multi-million-ounce gold reserve base and a strong growth profile from two development projects and two expansion projects. Equinox Gold operates entirely in the Americas, with two properties in the United States, one in Mexico and five in Brazil. Equinox Gold's common shares are listed on the TSX and the NYSE American under the trading symbol EQX. Further information about Equinox Gold's portfolio of assets and long-term growth strategy is available at www.equinoxgold.com or by email at [email protected].

This news release refers to all-in sustaining costs ("AISC"), AISC per ounce sold and sustaining and non-sustaining capital expenditures that are measures with no standardized meaning under International Financial Reporting Standards ("IFRS"), i.e. they are non-IFRS measures, and may not be comparable to similar measures presented by other companies. Their measurement and presentation is intended to provide additional information and should not be considered in isolation or as a substitute for measures of performance prepared in accordance with IFRS.

AISC per gold oz sold is a non-IFRS measure based on guidance announced by the World Gold Council ("WGC") in September 2013 and updated in November 2018. The WGC is a non-profit association of the world's leading gold mining companies established in 1987 to promote the use of gold to industry, consumers and investors. The WGC is not a regulatory body and does not have the authority to develop accounting standards or disclosure requirements. The WGC has worked with its member companies to develop a measure that expands on IFRS measures such as operating expenses and non-IFRS measures to provide visibility into the economics of a gold mining Company. Current IFRS measures used in the gold industry, such as operating expenses, do not capture all the expenditures incurred to discover, develop and sustain gold production. The Company believes the AISC measure provides further transparency into costs associated with producing gold and will assist analysts, investors and other stakeholders of the Company in assessing its operating performance, its ability to generate free cash flow from current operations and its overall value. Combined AISC does not include corporate G&A.

The 2020 Piaba underground resource estimate was prepared by Trevor Rabb, P.Geo of Equity Exploration Consultants Ltd. Mr Rabb is a Qualified Person as defined under NI 43-101 and is considered to be "independent" for the purposes of Section 1.5 of NI 43-101. The underground resource estimate has an effective date of December 31, 2019 and is included in Section 14 of the "Technical Report on the Aurizona Gold Mine, Brazil" (the "Technical Report") dated April 27, 2020, that will be filed on SEDAR, on EDGAR and on the Company's website within the next 45 days. The underground resource estimate presented herein is unchanged from the underground resource estimate disclosed by Equinox Gold in a press release dated March 19, 2019 that is available on the Company's website, on SEDAR and on EDGAR. Mineral resources are reported using a gold price of $1,500/oz gold, a cut-off grade of 1.0 g/t gold and constrained by using a 1.0 g/t gold confining solid. Mineral resources are reported exclusive of reserves. Mineral resources that are not mineral reserves do not have demonstrated economic viability. There is no certainty that all or any part of a mineral resource will be converted into mineral reserves. Numbers have been rounded to reflect the accuracy of the estimate. The PEA is preliminary in nature and includes Inferred Mineral Resources that are considered too speculative geologically to have the economic considerations applied to them that would enable them to be categorized as mineral reserves. There is no certainty that the results contemplated in the PEA will be realized.

This news release includes certain statements that constitute "forward-looking statements", and "forward-looking information" within the meaning of applicable securities laws collectively "forward-looking statements". These include statements regarding the growth potential of the Company. When used in this news release, words such as "will", "could", "potential", "would", "contemplates", "proposed", "expected", "plan", "budget", "expected", "estimated", "may", "continue", "advance", "intends", "growth" and similar expressions are intended to identify these forward-looking statements as well as phrases or statements that certain actions, events or results "may", "could", "would", "should", "occur" or "be achieved" or the negative connotation of such terms. As well, forward-looking statements may relate to future outlook and anticipated events, such as the Company's intention and ability to advance the Aurizona underground mine to a pre-feasibility level, the results of exploration drilling and the Company's ability to convert Inferred Resources to Indicated Resources for inclusion in a pre-feasibility study, the timing for completion of a pre-feasibility study, the likelihood of the Company ultimately advancing the underground mine to production, and the Company's ability to achieve the production and cost estimates outlined in the PEA. The PEA is preliminary in nature and includes Inferred Mineral Resources that are considered too speculative geologically to have the economic considerations applied to them that would enable them to be categorized as mineral reserves. There is no certainty that the results contemplated in the PEA will be realized. Forward-looking statements also refer to the Company's ability to advance its development and expansion projects and achieve its growth objectives.