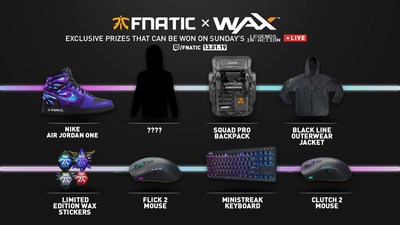 To celebrate the partnership, WAX and Fnatic will be organizing hundreds of prizes and giveaways for fans before and during Fnatic's "Legends in Action - Live" from Berlin this weekend including 'legendary' cut-and-sew custom Air Jordan shoes with unique Fnatic designs, merchandise autographed by the team's pro players, pro gaming gear and more. All of which will be given away in real-time using WAX technology.

During the stream, Fnatic players will be doing live Q & A with fans, giveaways, contests, and more. The event will be streamed live on Twitch https://www.twitch.tv/fnatic from FNATIC HQ on Sunday, January 13 at 6 pm GMT+1. With WAX's technology, fans will be able to participate in the action and win prizes in real time by tuning in live on Twitch [https://www.twitch.tv/fnatic] to receive free Fnatic x WAX collectibles.

Additionally, an entirely new line of Fnatic x WAX digital memorabilia and collectibles will be released during the live event. Fans who get these can sell, swap, store and gift these limited-edition items on their WAX ExpressTrade account - instantly and for free. That means that for the first time ever, esports fans can acquire branded physical merchandise from a team and its players, then trade those items with anyone else in the world without ever having to take physical ownership of it. Or, they can store the digital version of the item in their WAX account and have it shipped to them at a later time. The WAX Platform's use of blockchain technology ensures each Fnatic x WAX item is 100% authentic and cannot be altered or counterfeited by a third party, which means that the digital versions of Fnatic products can now be used online in ways not before possible.

"We see this new kind of transaction experience as very forward-thinking, and it's something we've been waiting years to try, since people are already very used to trading virtual items in the games they love," said Benoit Pagotto, brand director of Fnatic. "With this initiative, we want to start to define, with our fans, what the future of collectible and cool fan memorabilia could be. We are proud to be the first esports organization, and one of the first brands, to offer this to our fans."

"We built the WAX E-Commerce Blockchain Platform from the ground up to enable these kinds of innovative, new e-commerce experiences," said William Quigley, CEO of WAX. "We're excited to usher in this new form of e-commerce where fans can instantly receive, trade and share their favorite products and collectibles in-stream. This technology opens up all sorts of new avenues for engagement and monetization for streamers and their viewers."

About FnaticFNATIC is a leading, global esports organisation with professional teams and unrivalled legacy in some of the most popular competitive games, including League of Legends, Counter-Strike, Dota 2, Fortnite and more.

Since being founded in 2004 by Sam Mathews, Fnatic teams have claimed multiple international championships including the inaugural League of Legends World Championship, seven EU LCS Championships and three separate CS:GO Majors, the only team to have accomplished that. In 2015, Fnatic launched its popular esports equipment line of gaming peripherals, Fnatic Gear, now used by gamers and pros worldwide. In addition, the organization broke new ground in 2016 when it launched the first ever esports concept retail store, BUNKR.

About WAX (Worldwide Asset eXchange)WAX is the world's first blockchain built for global e-commerce. WAX's patent-pending blockchain e-commerce platform is the safest and most convenient way to create, buy, sell, and trade virtual items - to anyone, anywhere in the world. The world of digital ownership today is defined by its restrictions. WAX is building a future to where it will be redefined by its freedom. WAX is creating a full suite of blockchain-based tools that allows anyone to trade digital or even physical items instantly and securely, to anyone, anywhere. Participants of the Worldwide Asset eXchange gain access to a global community of collectors and traders, buyers and sellers, creators and gamers, merchants and game developers. For more information, please visit https://wax.io and http://www.opskins.com, and follow along on Twitter, Facebook and Telegram.