VANCOUVER, BC, June 15, 2020 /PRNewswire/ - Etruscus Resources Corp. (CSE: ETR) (FSE: ERR) (the "Company" or "Etruscus") is pleased to announce the discovery of a very large and compelling new target – "The Wall" – at its 100%-owned Rock and Roll Property in the heart of the Eskay Camp in Northwest British Columbia's Golden Triangle. "The Wall" is immediately adjacent to the Black Dog Deposit and is prospective for high-grade gold, silver and base metals on a property that's located within 13 km of where both Skeena Resources and Seabridge Gold are drilling at or near past-producing mines. A work program is being finalized and is expected to commence shortly. 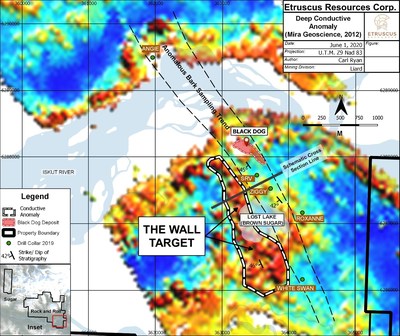 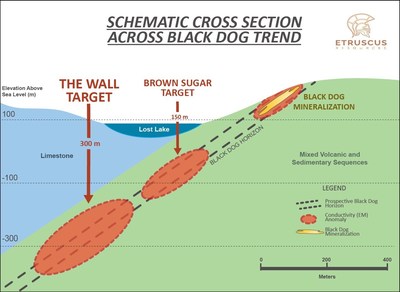 "The Wall target is a product of many months of examining multiple geological, biogeochemical and geophysical clues at Rock and Roll," stated Dr. Webb, V.P. Exploration. "After last year's successful program, it further supports our contention that the original Black Dog Deposit is merely the tip of the iceberg at Rock and Roll – there is much more to be found, and that perfectly fits the model of other Eskay Camp deposits."

A moderate biogeochemical trend was first shown to project in the direction of The Wall last year. Age dating led to a new geological model followed by reinterpretation of geophysical data showing a deep conductive anomaly within the same stratigraphy that hosts the Black Dog Deposit.

Geophysical modeling of the 2 km by 0.5 km EM anomaly defined at 295 m depth (see maps below)demonstrates a moderately continuous conductor from the Black DogDeposit down to The Wall. The key prospectivity of this conductor comes from its location along the down dip trend of the Black Dog mineralization.

These images below suggest that mineralization from the Black Dog Deposit could occurdown dip through the Brown Sugar and The Wall targets.

Etruscus is finalizing plans for the upcoming season and is prioritizing a drilling campaign at The Wall and other targets. Further VTEM© planned to be flown in the area early in the season will provide more details about all drill targets. This will be combined with geological mapping to provide guidance on how to best drill these targets.

A hit at The Wall would open up a significant amount of prospective terrain and could massively open the Black Dog system in other directions away from the main northwest/southeast surface trend.

"We are very excited about The Wall target and its potential for hosting a large massive sulphide body at Rock and Roll," stated President and CEO Gordon Lam. "We are about to start our season and we're eager to build upon the many drill targets and prospective areas our huge land package offers."

Technical aspects of this news release have been reviewed and approved by Dr. Dave R. Webb, Ph.D., P.Geo., who is a Qualified Person as defined under National Instrument 43-101.

Etruscus Resources Corp. is a Vancouver-based exploration company focused on the development of its 100%-owned Rock & Roll and Sugar properties comprising 27,136 hectares near the past producing Snip mine in Northwest B.C.'s prolific Golden Triangle.

Etruscus is traded under the symbol "ETR" on the Canadian Securities Exchange and "ERR" on the Frankfurt Stock Exchange and has 22,453,501 common shares issued and outstanding.

On behalf of the Board of Directors:

Neither the CSE nor its Regulation Services Provider (as that term is defined in the policies of the CSE) accepts responsibility for the adequacy or accuracy of this release.